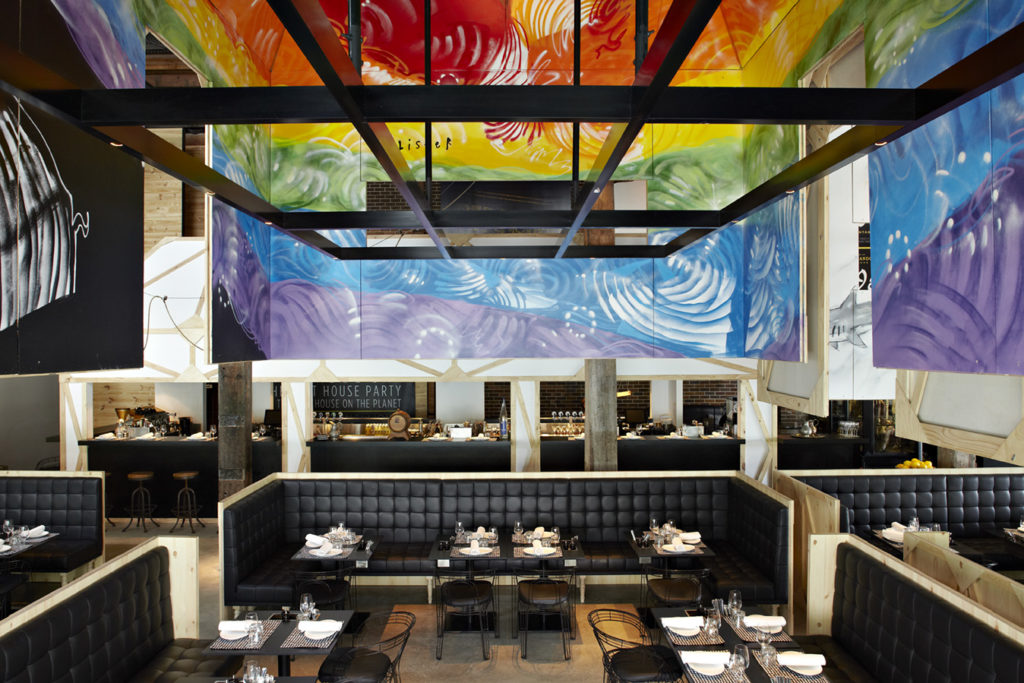 The Neild Avenue Restaurant in Sydney is Lazzarini Pickering’s most recent project for the office’s long-standing clients Maurice Terzini and Robert Marchetti. Neild Avenue proposes a new configuration of the GAS Restaurant in Melbourne: the re-dimensioning of a large open space through the definition of smaller more intimate and gathered spaces that remain open toward one another.

This was achieved by imagining a theatrical system based on the construction of five volumes in natural wood and canvas that imitate the form of five houses. They contain the entrance to the restaurant, the bar, the kitchen and two dining rooms. The latter two are adjustable and periodically change their appearance. They can be floated up toward the ceiling to contain numerous tables, or lowered to enclose the dining areas and offer guests more privacy. This game allows the owners to re-proportion the tall (12.5 m) space of this former tire factory. The canvas panels of the ‘houses’ are re-painted every six months by different contemporary artists, decisively modifying the appearance of the entire restaurant.

The final effect is reminiscent of a theatre machine, in which fine dining becomes an artistic performance. The configurations created  by this space are a trademark of the office’s work.

The raw quality of the five ‘houses’ contrasts with the careful detailing and high definition of the furnishings designed and built specifically for the project. Examples include the benches and upholstered sofas, the light fixtures and tables, all rigorously black. The dining chairs, whose structure features a filigree weave of steel wire, projects suggestive plays of light and shadow onto the paving, further reiterating the theatrical nature of the design. 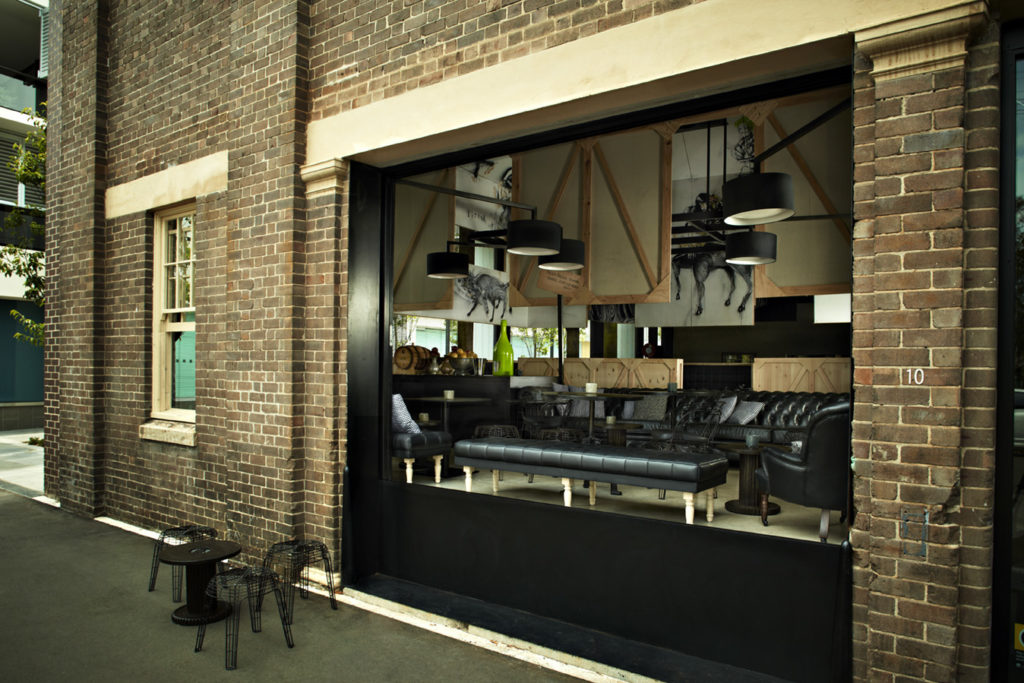 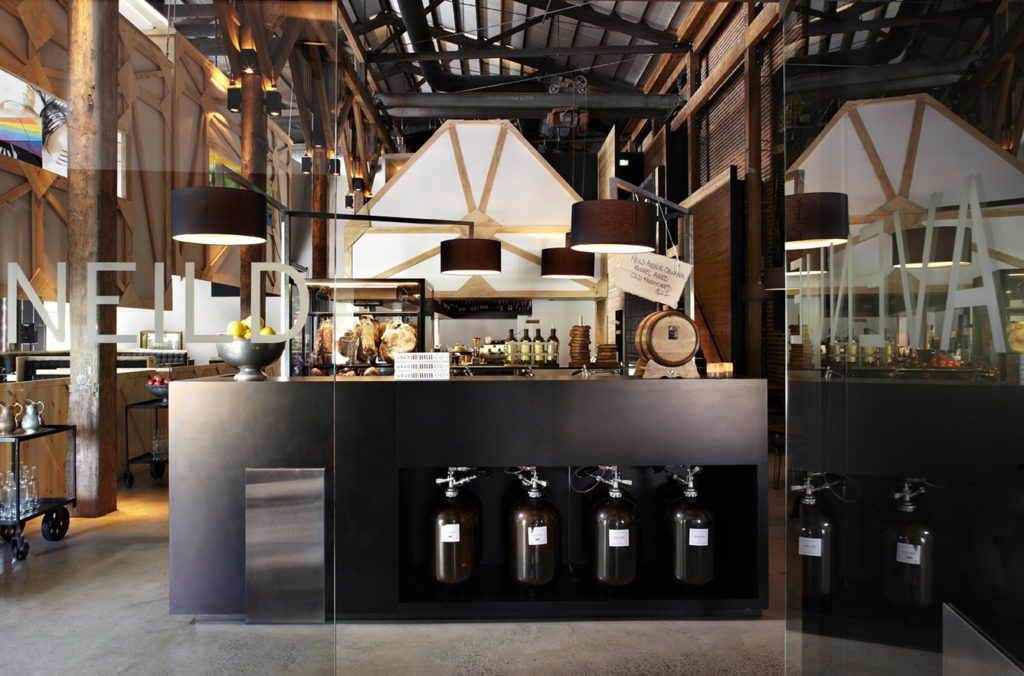 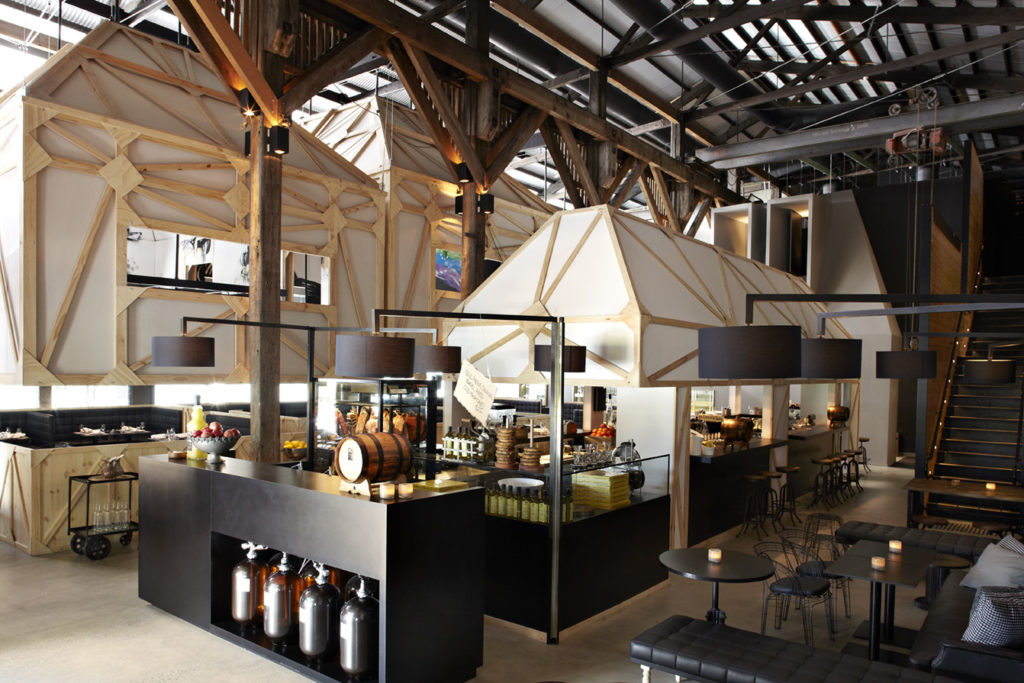 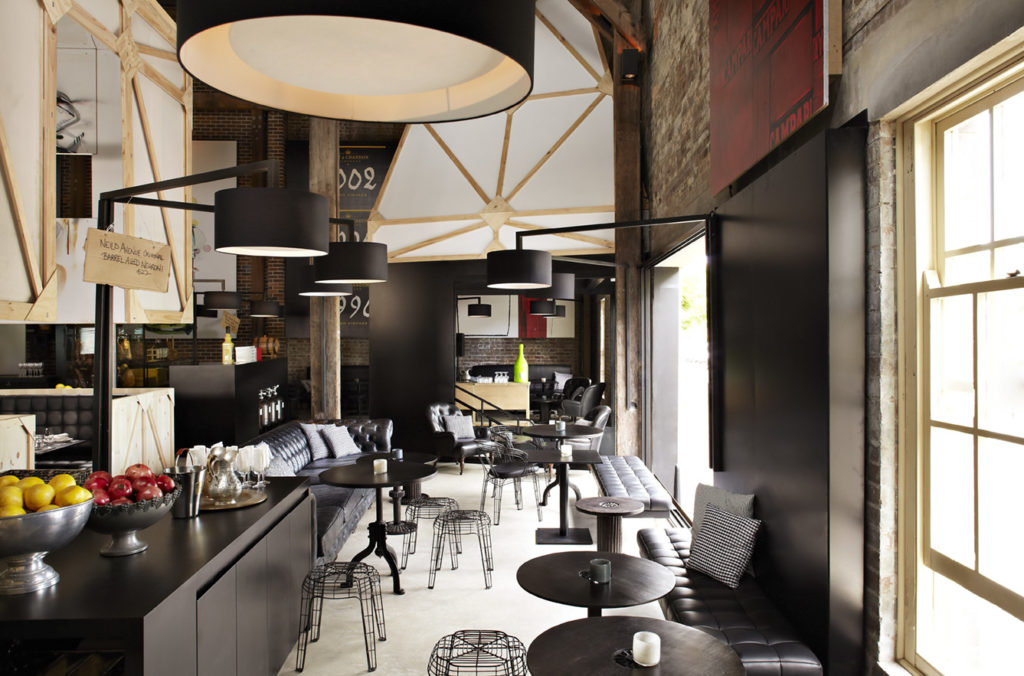 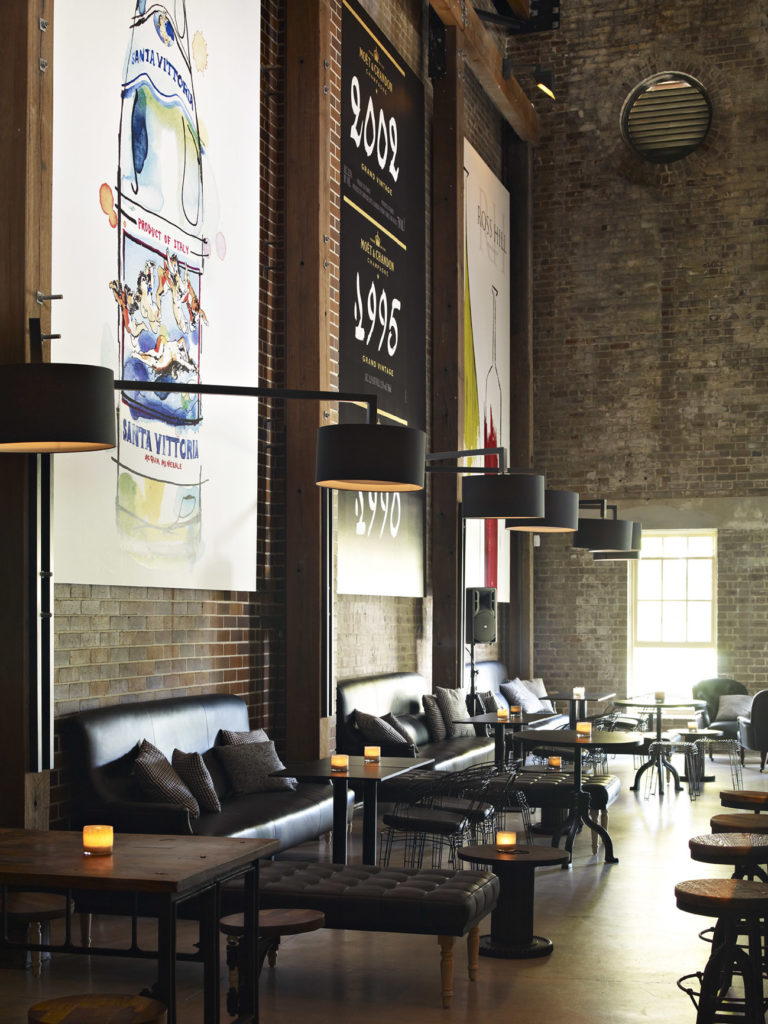 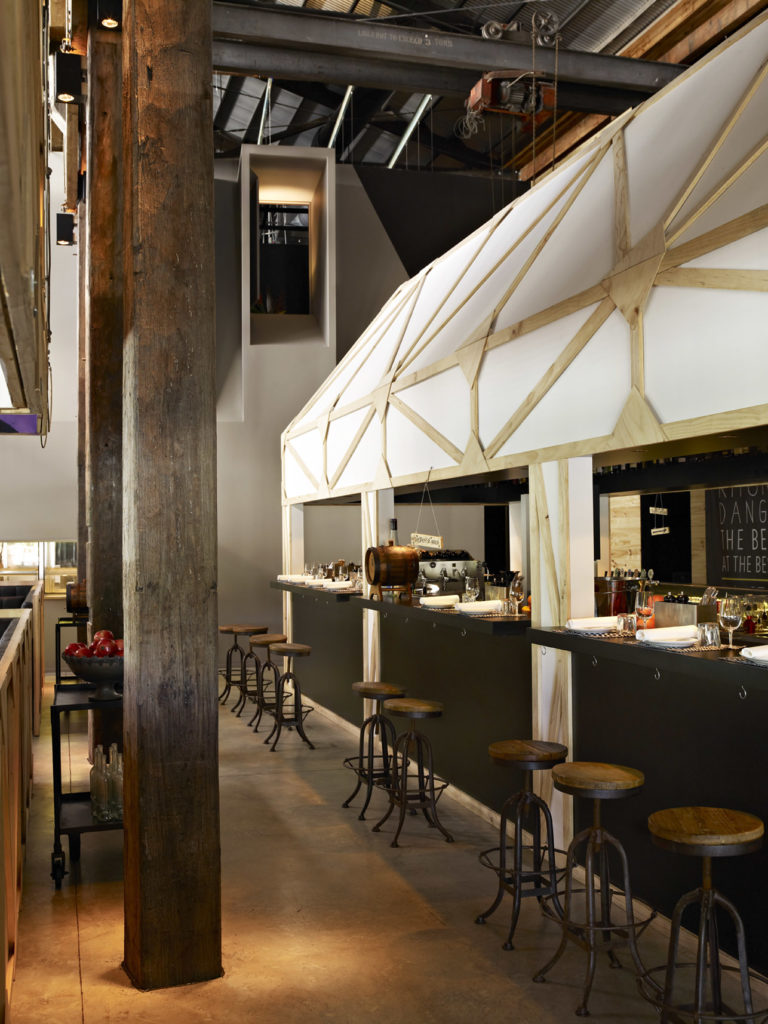 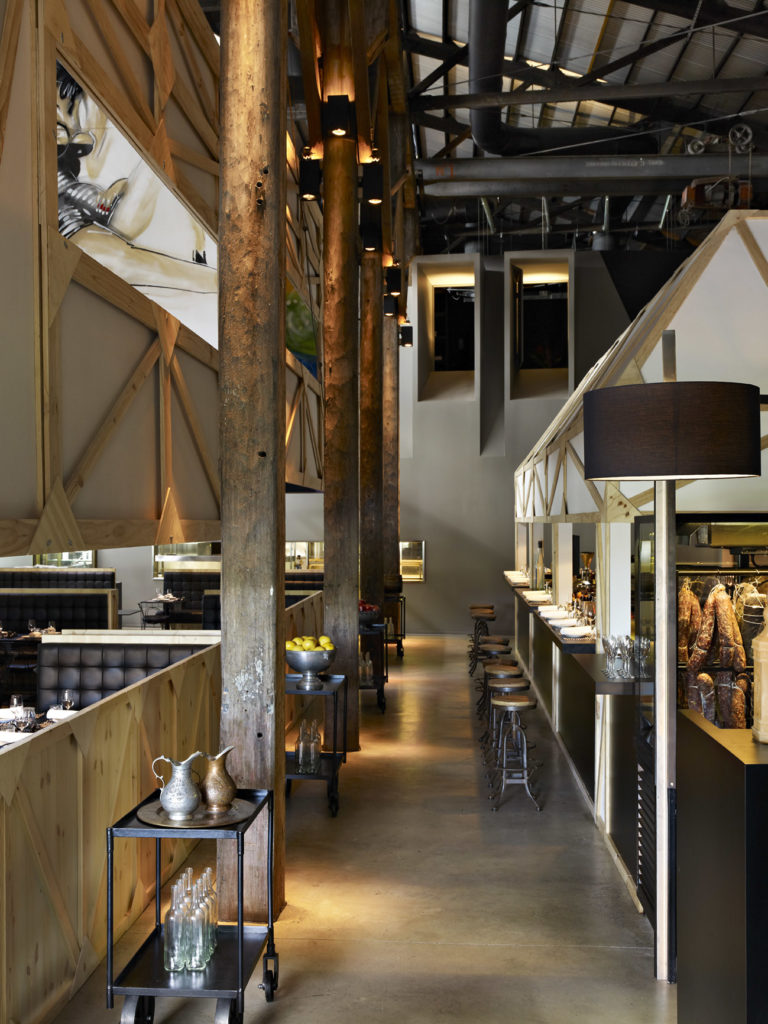 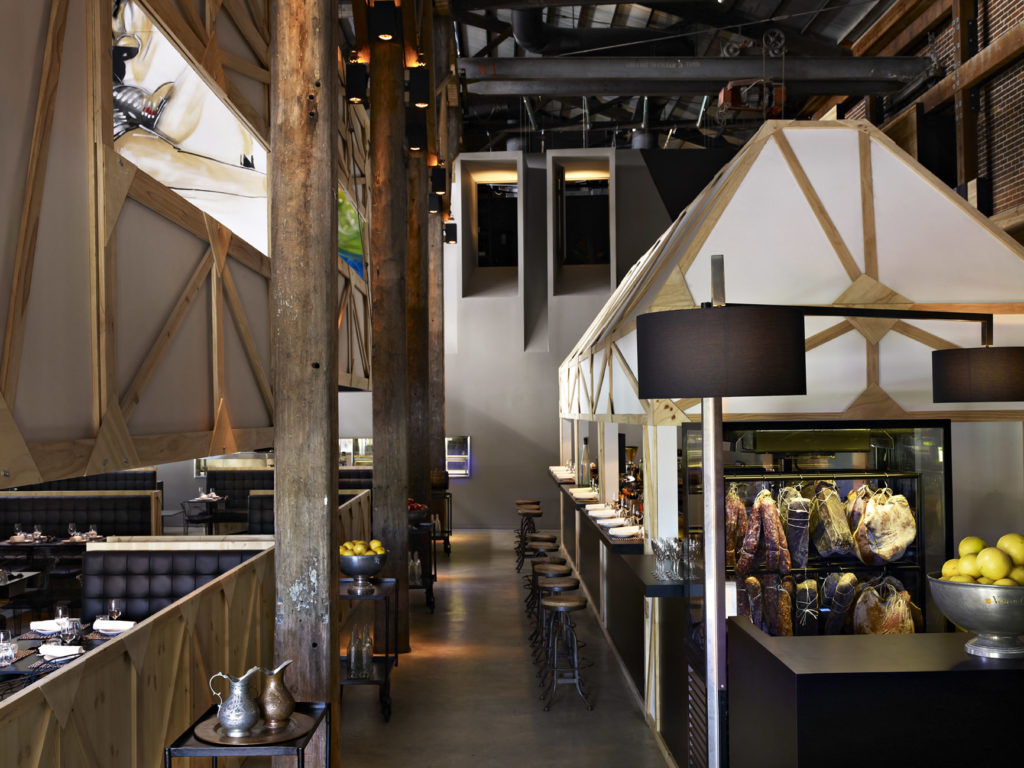 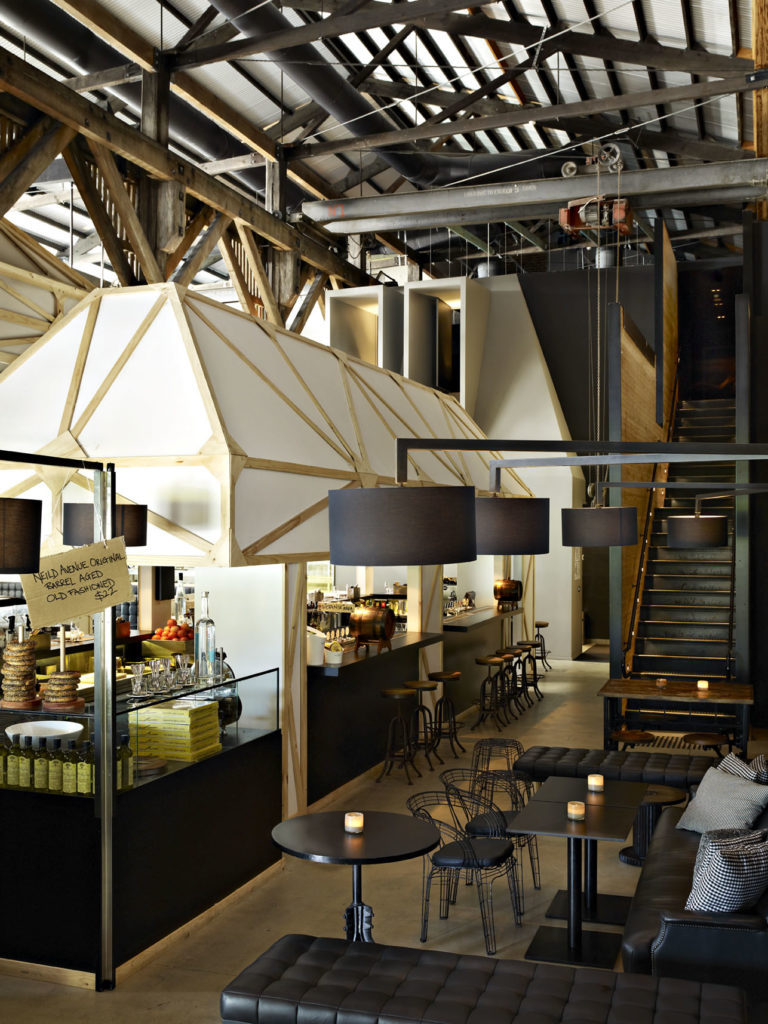 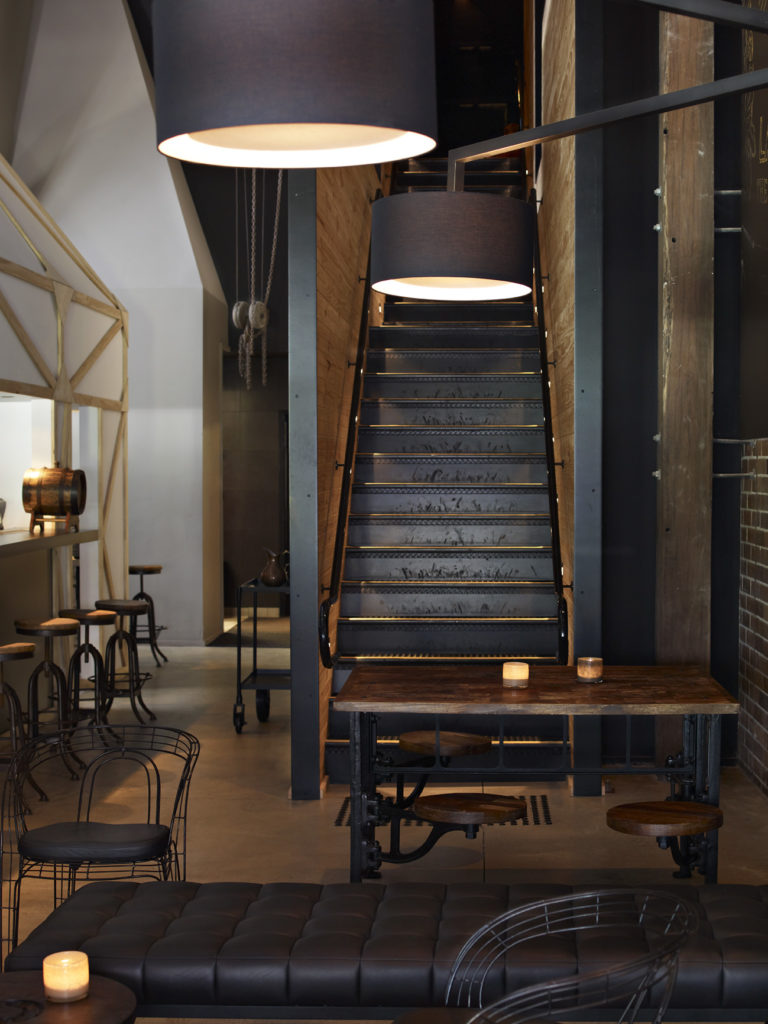 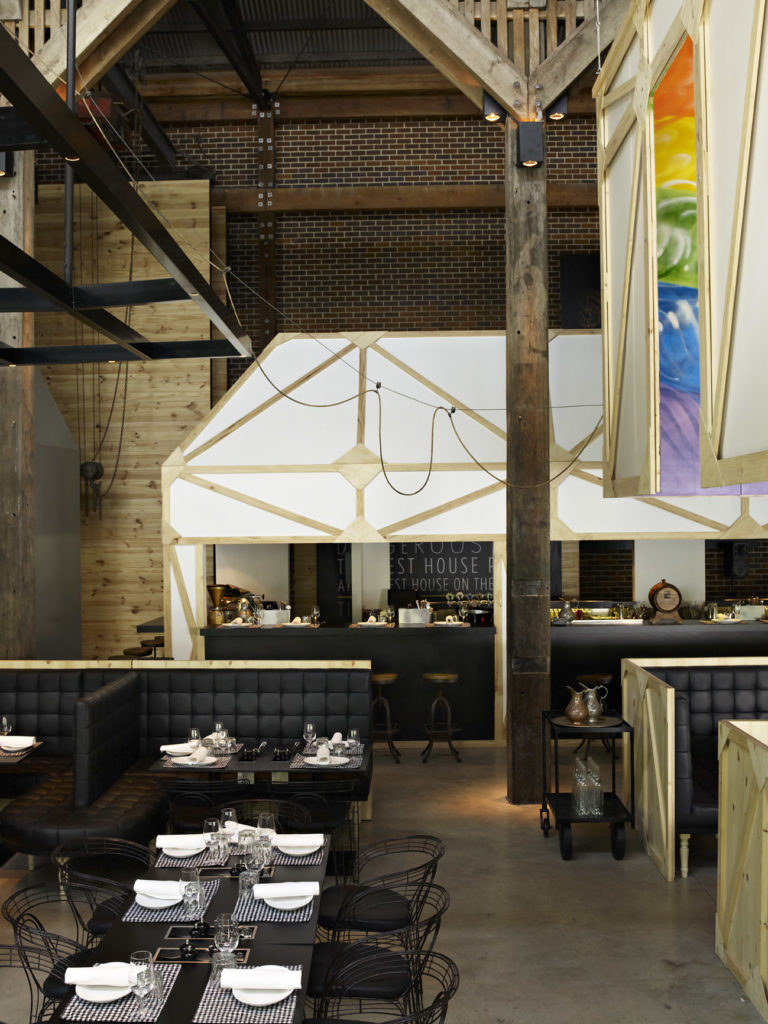 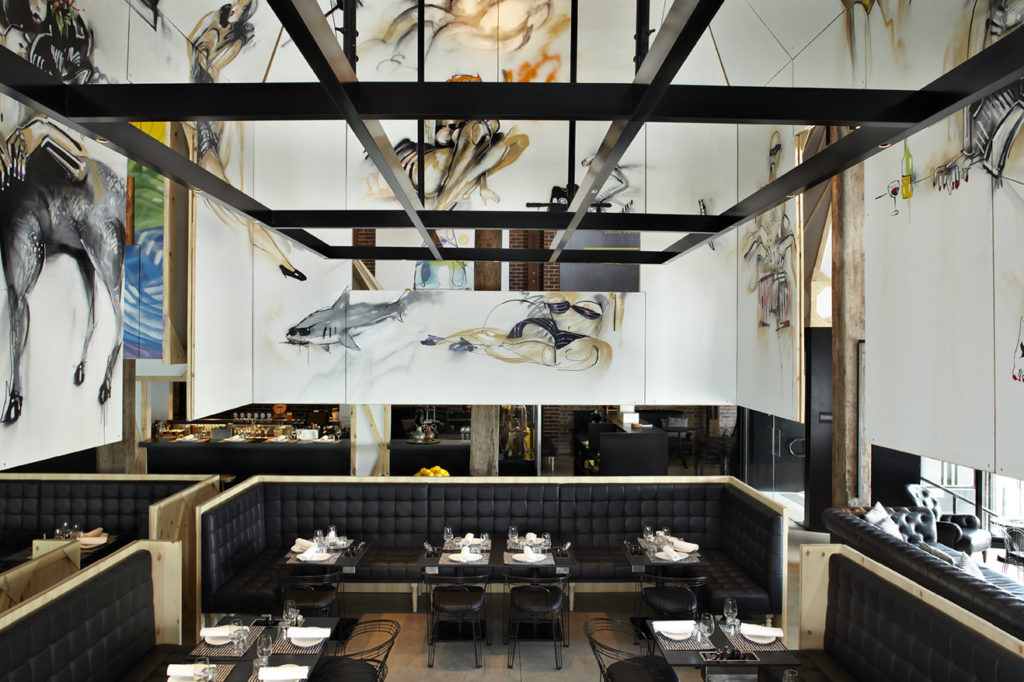 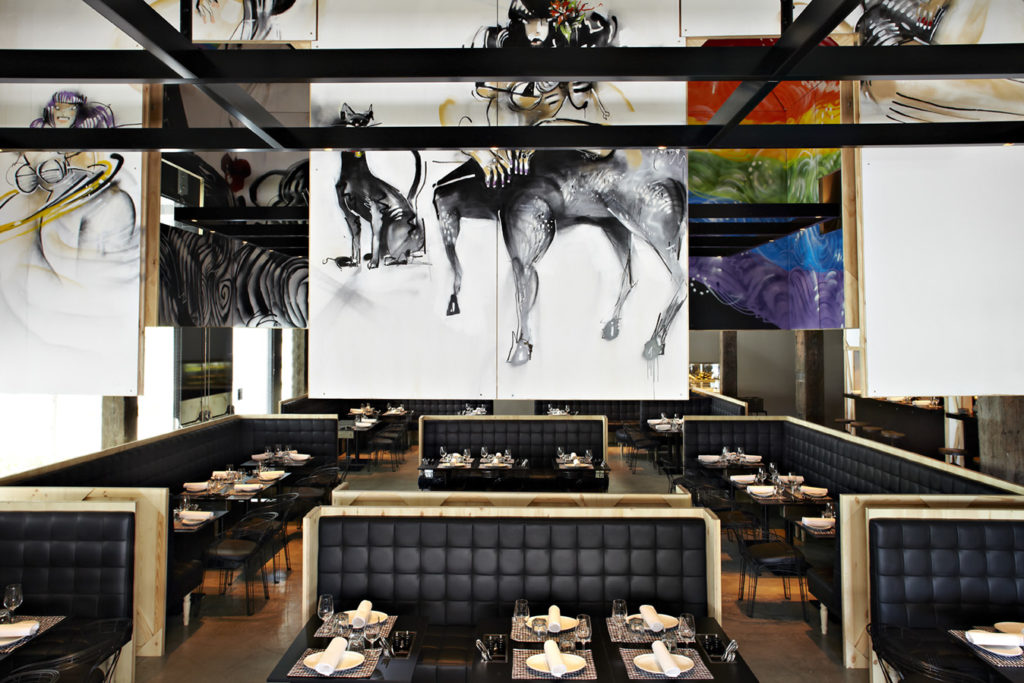 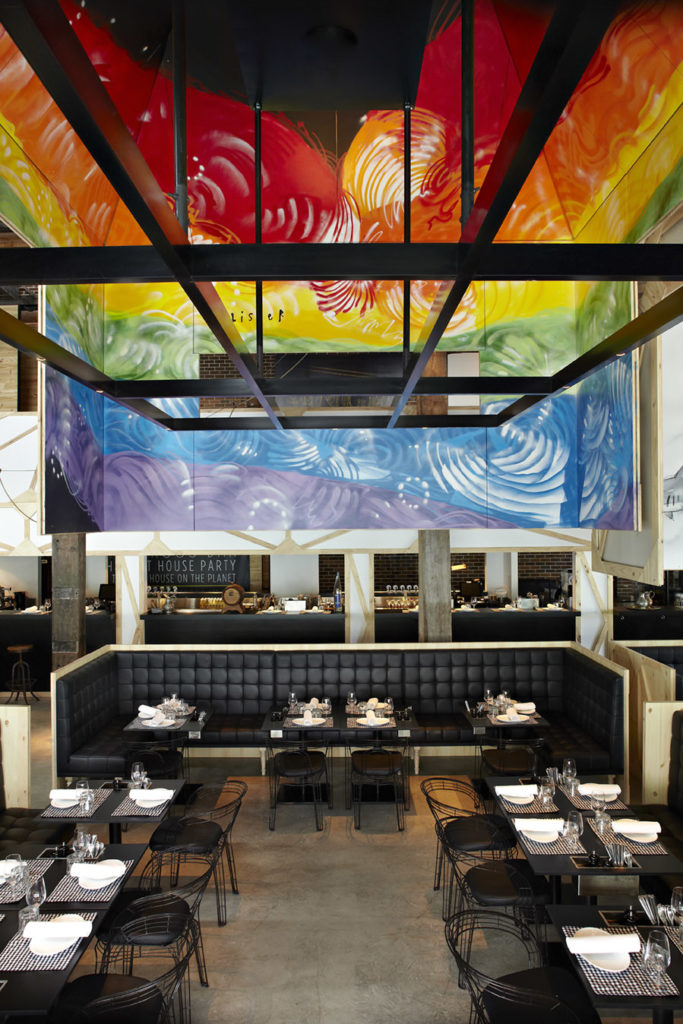 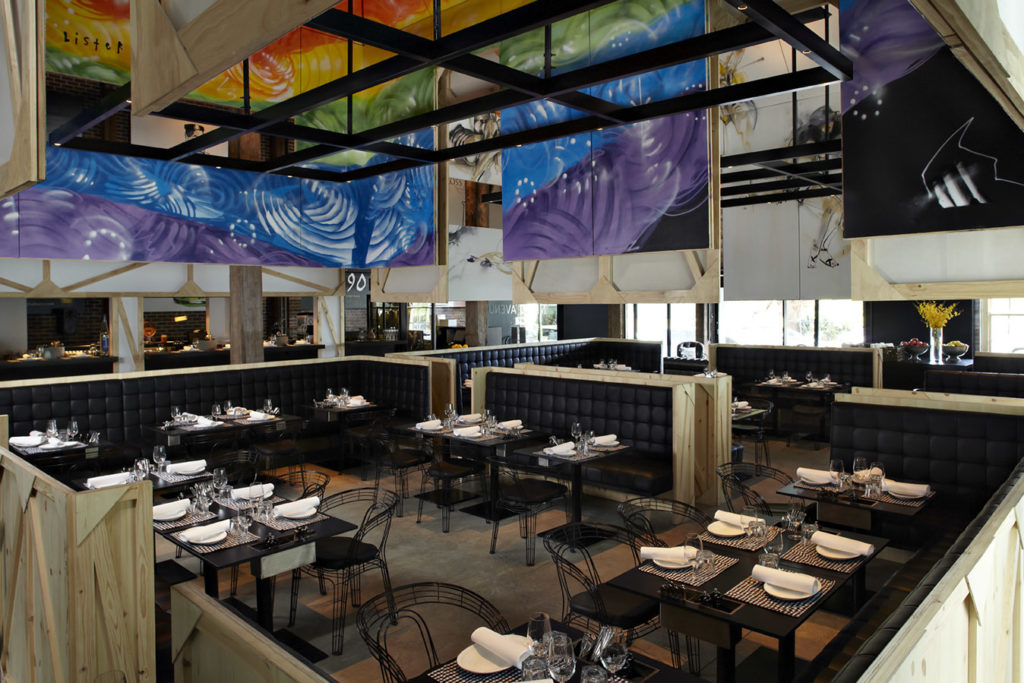 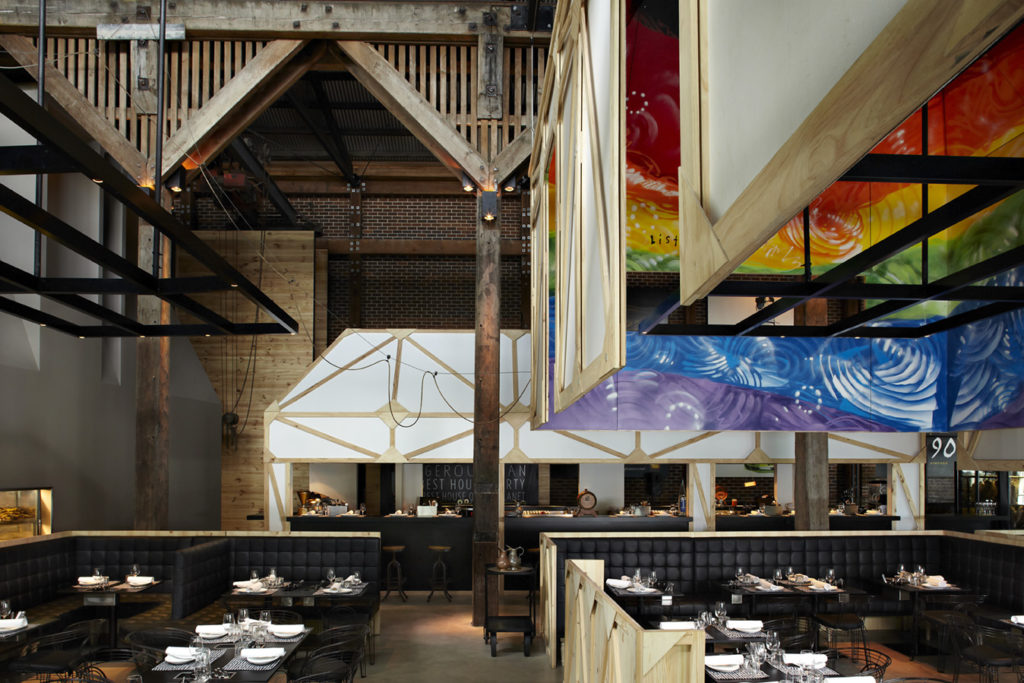