One of the revolutions in international retail design proposed by Lazzarini Pickering for Fendi’s new boutiques is undoubtedly the openly architectural quality of the interiors. The office’s adventure with Fendi began in 1997 with the design of the brand’s new flagship store in Rome. The displays were not designed as traditional furnishings, but instead as elements that actively participate in the construction of space, becoming architecture. They insinuate their way into the rooms, crossing them and creating a composition of overlaps between volumes, planes and straight lines. They delineate an intimate dialogue between one area and another. Display shelving, counters and tables, up to ten meters in length, interact three-dimensionally with the sales area. They run from one room into another until they come up against the glazing of the exterior walls, the only element that keeps them from running out into the street. The project thus eliminates the classical concept of the shop window, replacing it with a diaphragm that joins rather than separates, an idea that would be borrowed by many other designers. For Lazzarini Pickering “the objective was to create a stunning mediatic effect, in which passers-by and clients come into contact with one another through a play of references between inside and outside”.
Visitors are thus involved in a theatrical mise-en-scène in which they act alongside the objects on display. There are no pre-established routes, nor is the merchandise clearly separated from the client; instead, it is easily accessible, always close at hand. The experience of the brand’s unique and precious products becomes more direct. They can be touched to experience the quality of the materials and worn with simplicity. Articles of clothing are informally presented, offering an image of chaos studied in all of its details.
Another original element of the project is the choice of the colours used in the sales areas, privileging darker tones and refuting the traditional use of white. The resulting warm and luxurious atmosphere is obtained thanks to an unusual research into materials that emphasises Fendi’s experimental approach: raw steel with blue reflections in the paving and shelving; mica-iron paint finished plaster panels cladding the wall; wengé wood tables. This combination was designed to obtain richly patterned surfaces, with shifting effects under light and shadow, highlighting the accessories designed by the Roman Maison.
The general concept for the aesthetic and functional renewal of Fendi’s showrooms around the globe is flexible and easy to adapt to the various different conditions of the spaces and cities where the brand is present. The project involved 80 international boutiques in France, the United Kingdom, China, Japan and the United States, between 1997 and 2002. Worthy of particular mention are the stores in Paris and London, both from 1999. The Parisian boutique occupies multiple levels: the fulcrum here is the stair, a sculptural element that expands vertically to create multiple connections between rooms and display products. In London, instead, the project exasperates the osmosis between interior and exterior, with the shelving becoming an integral part of the shop windows, adding new lines to the building’s white Portland stone façade.
Each boutique emphasise the architectural use of furniture that has become the signature of the office’s work. 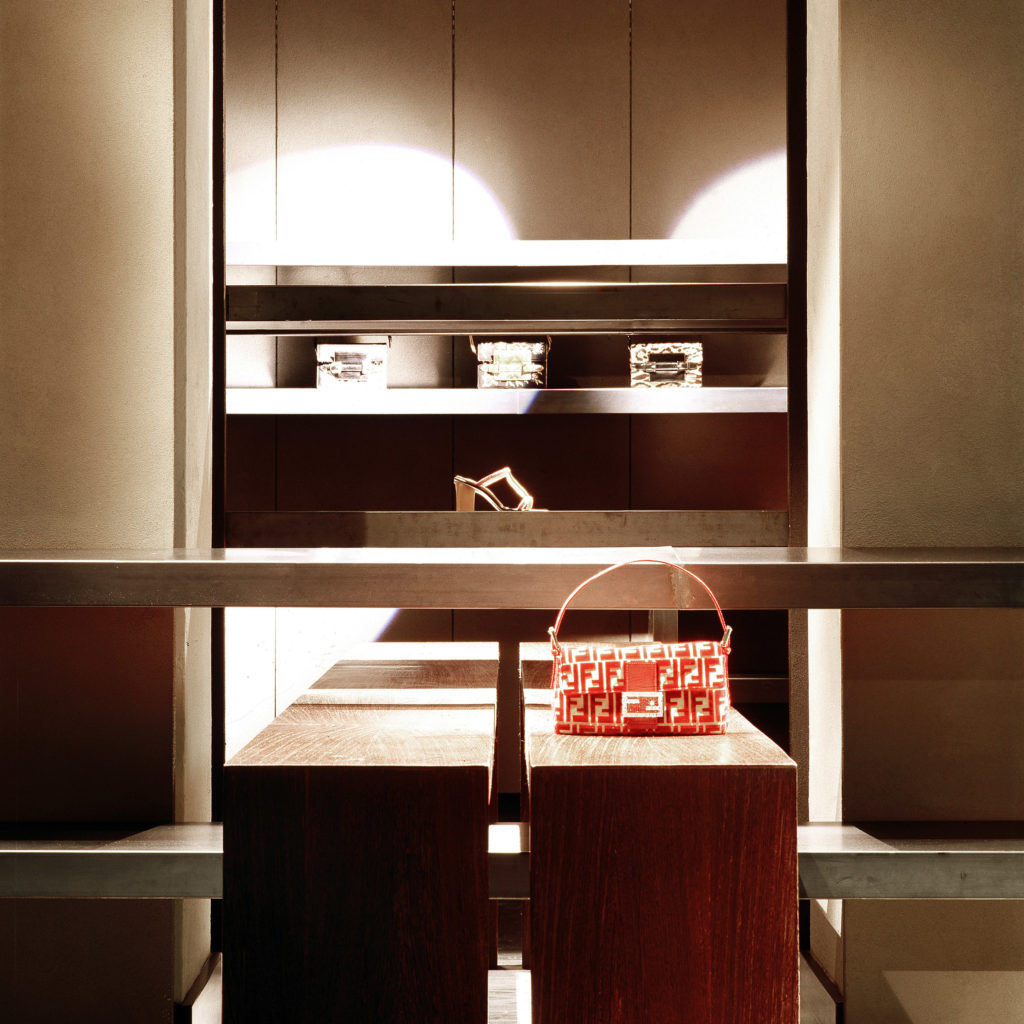 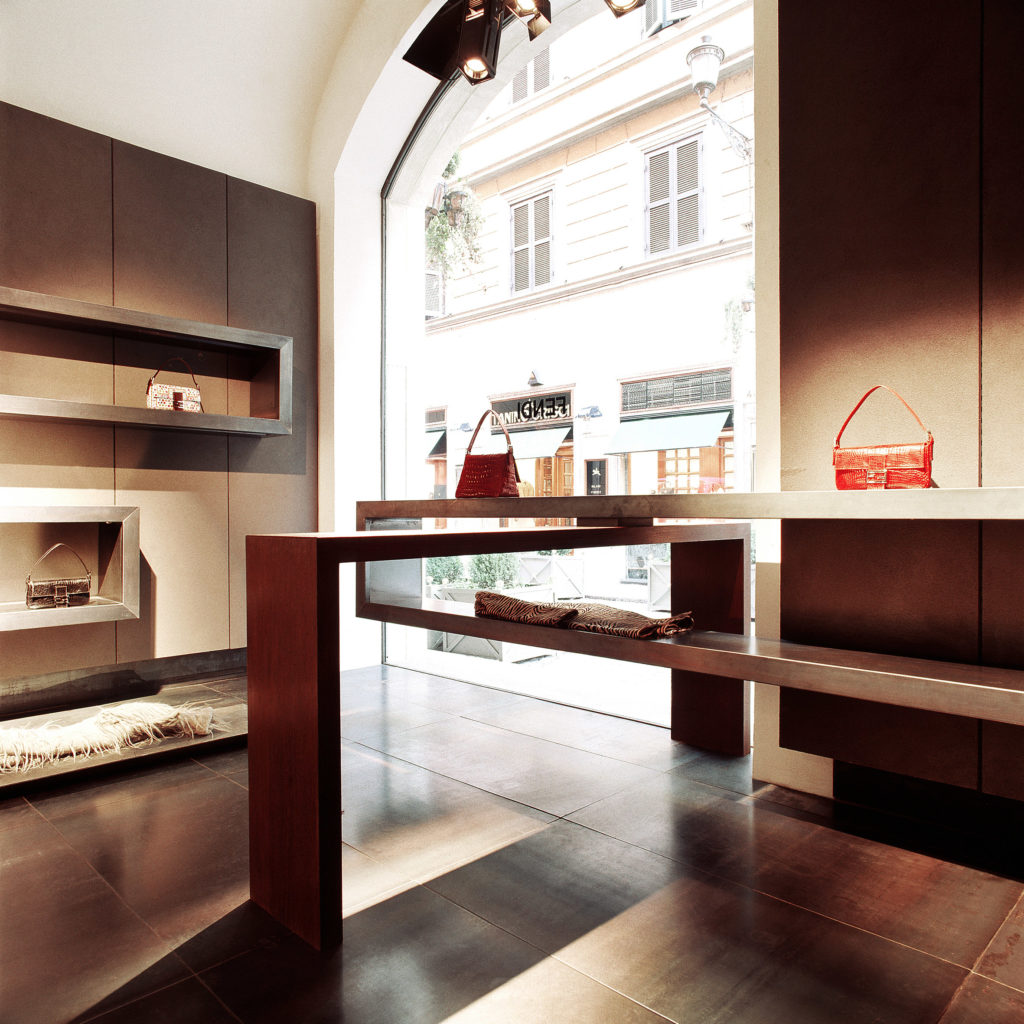 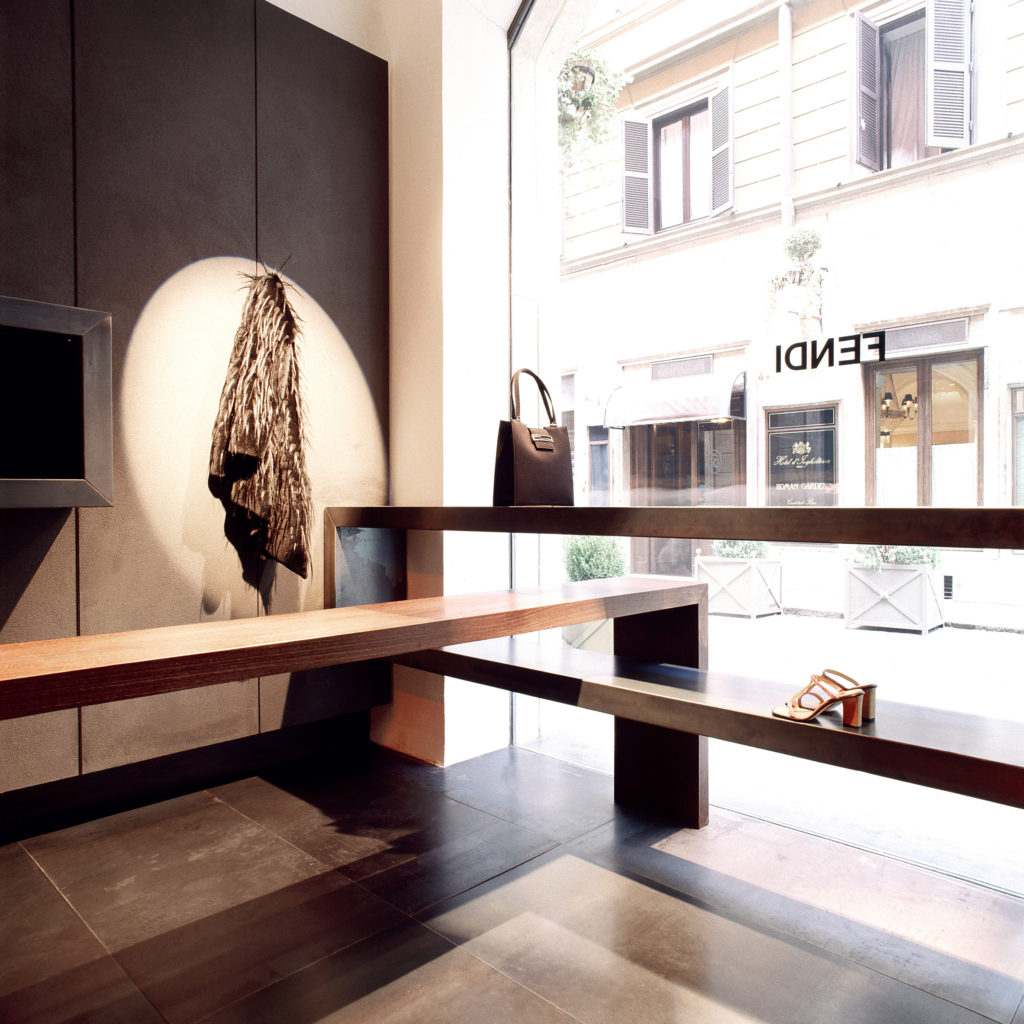 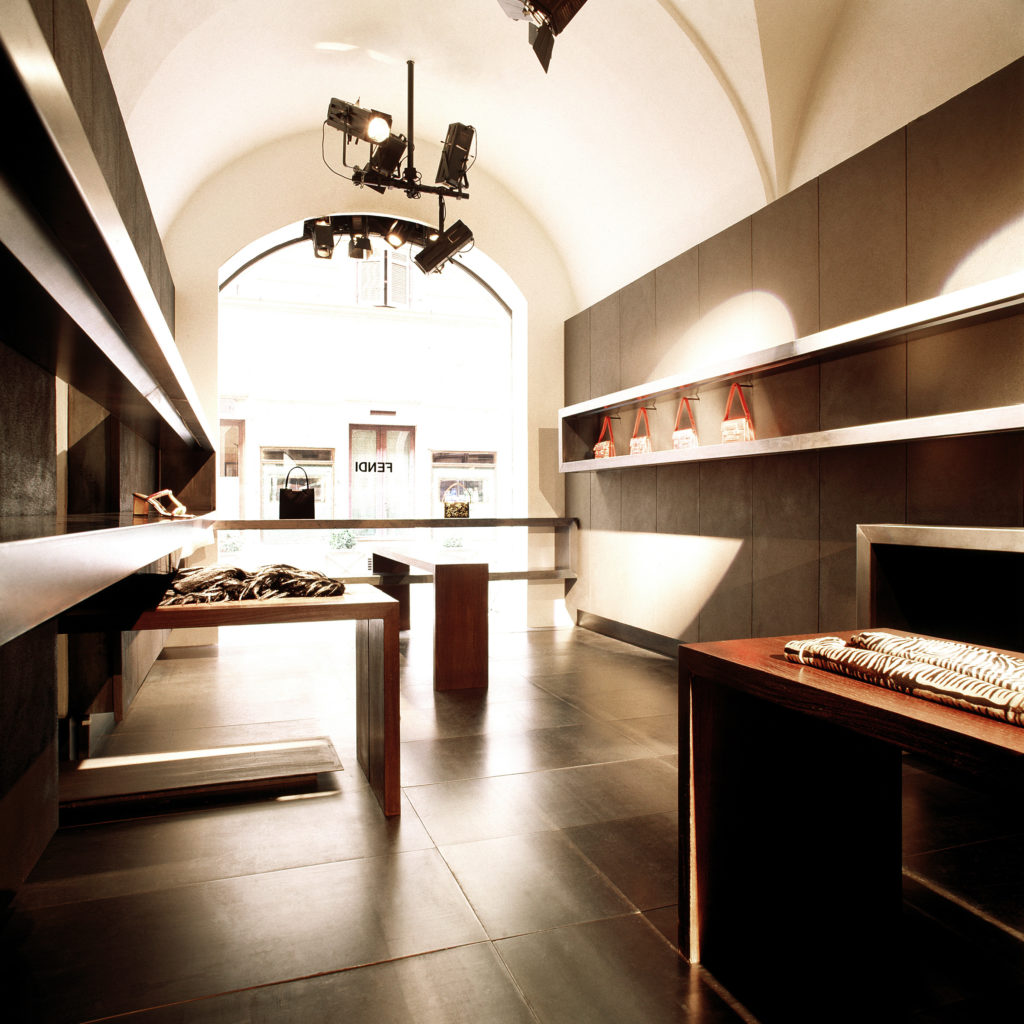 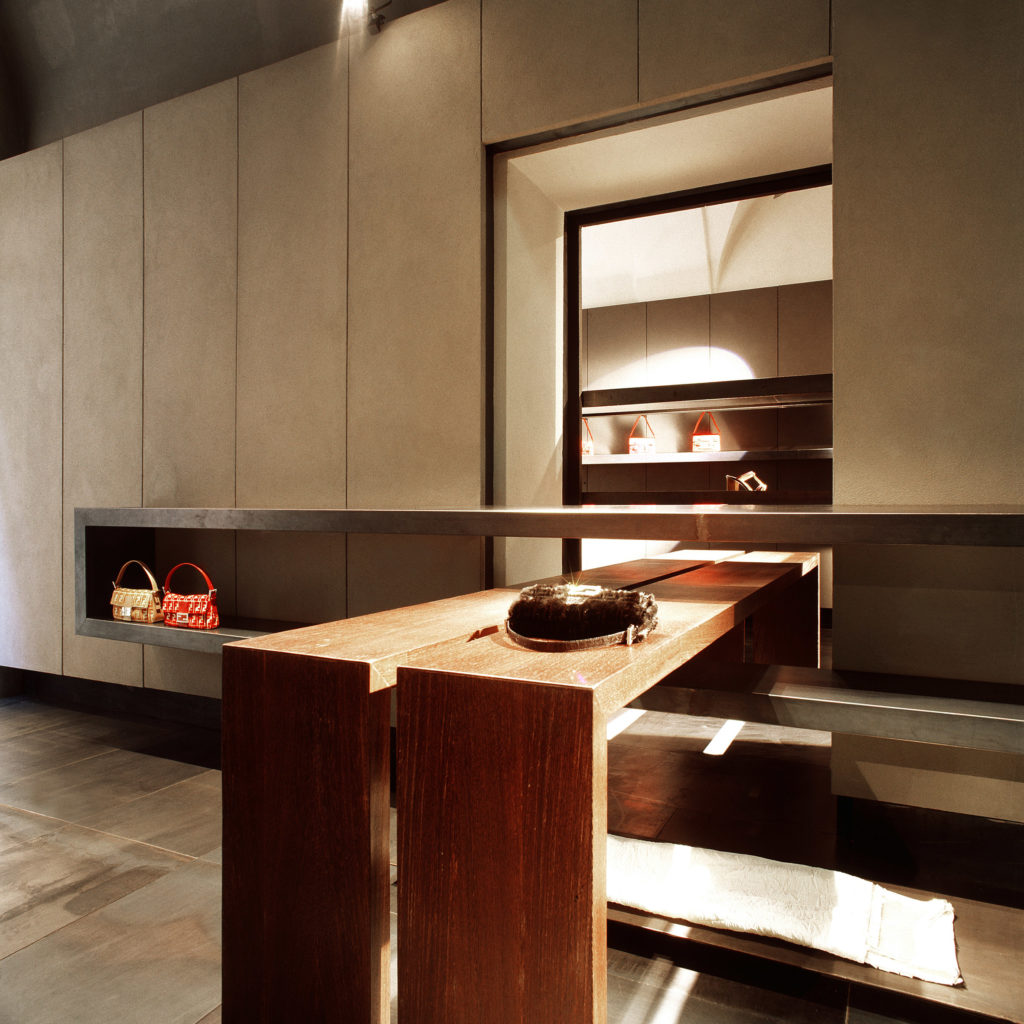 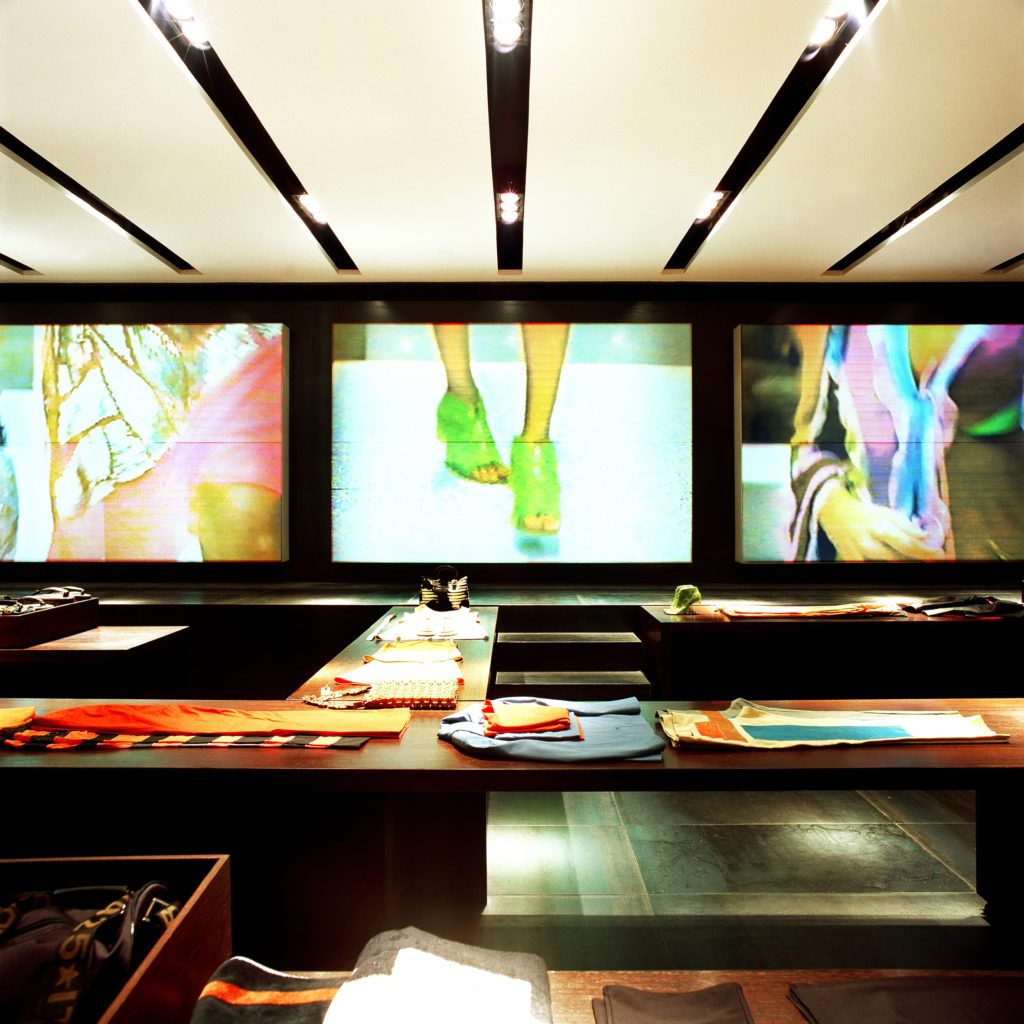 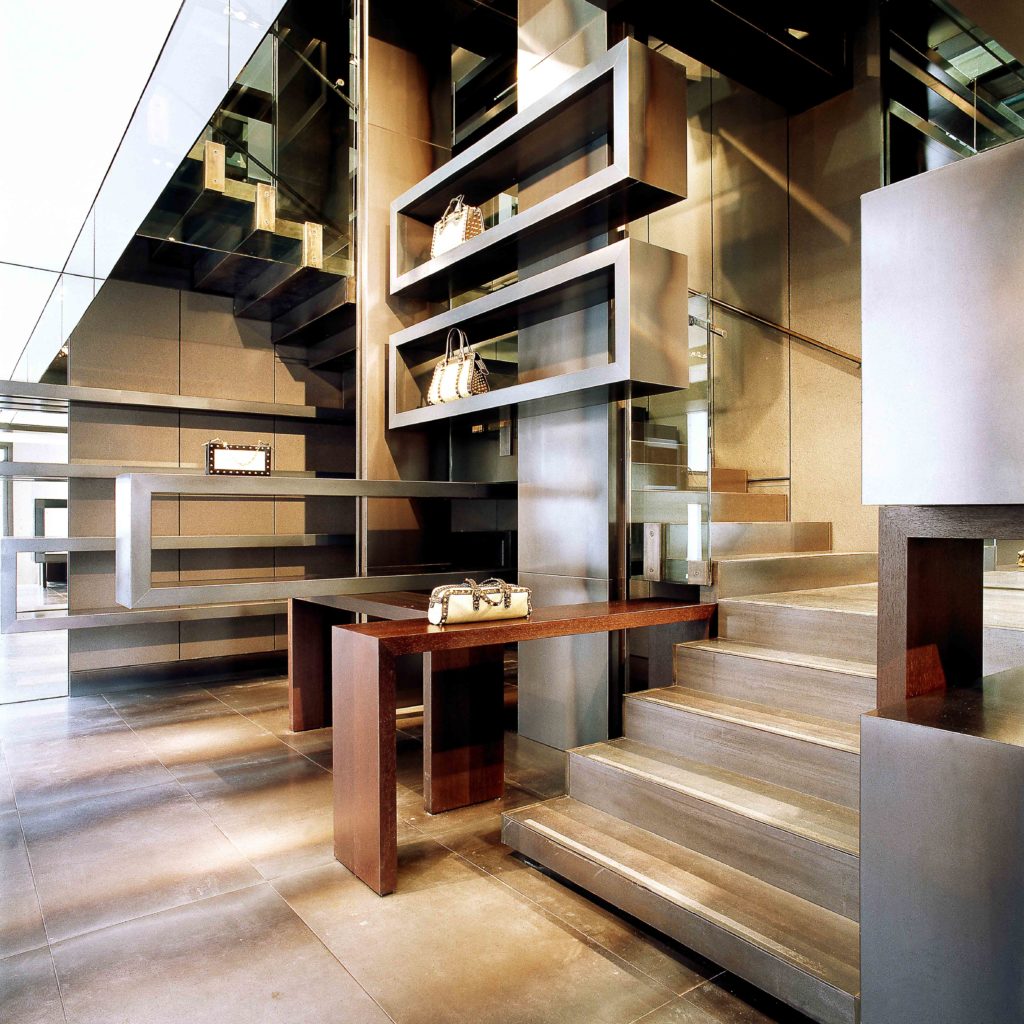 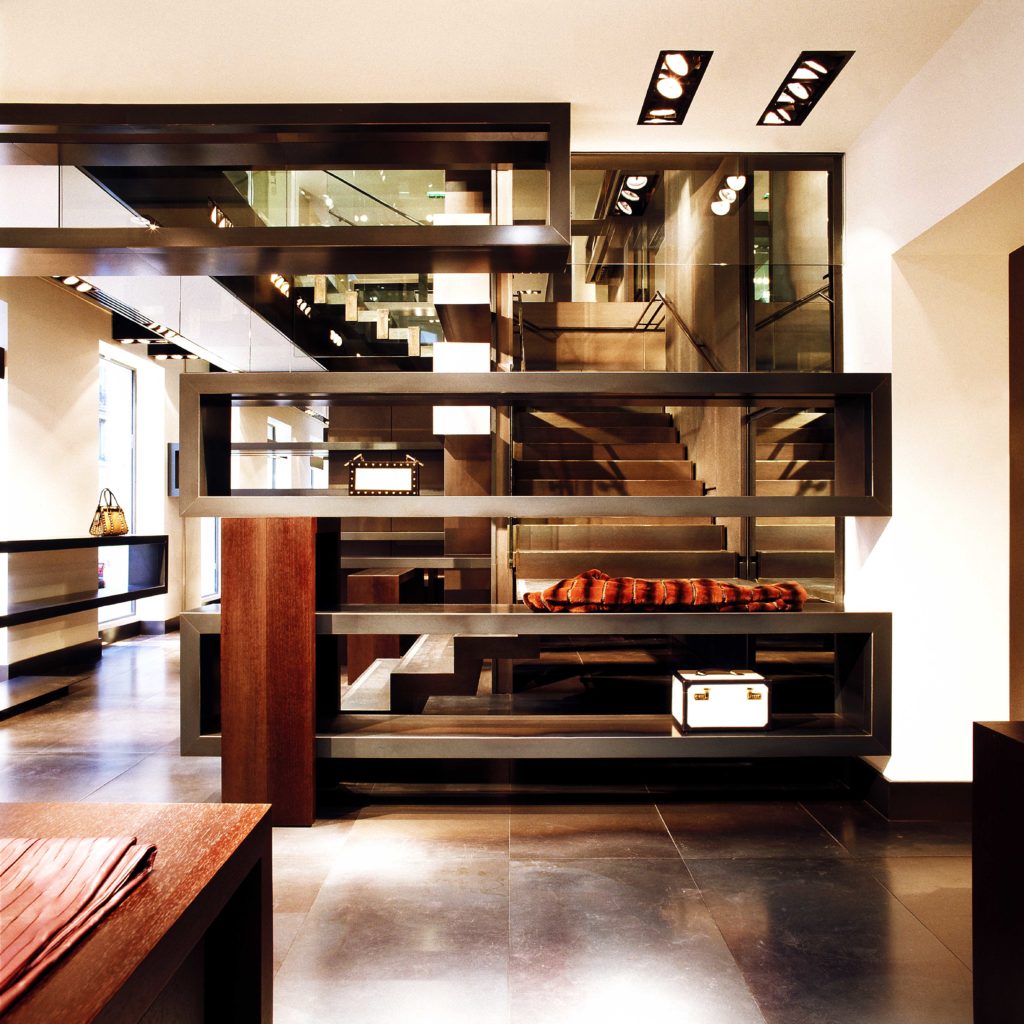 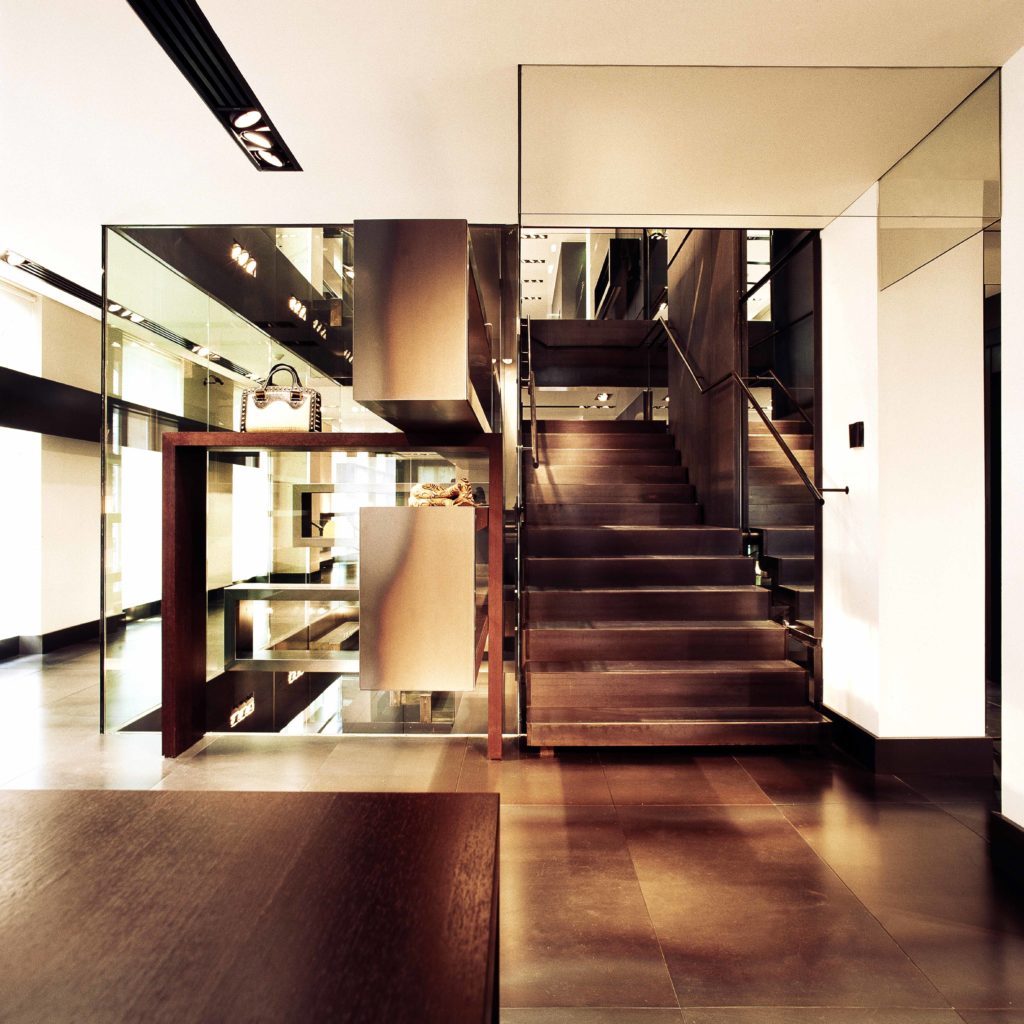 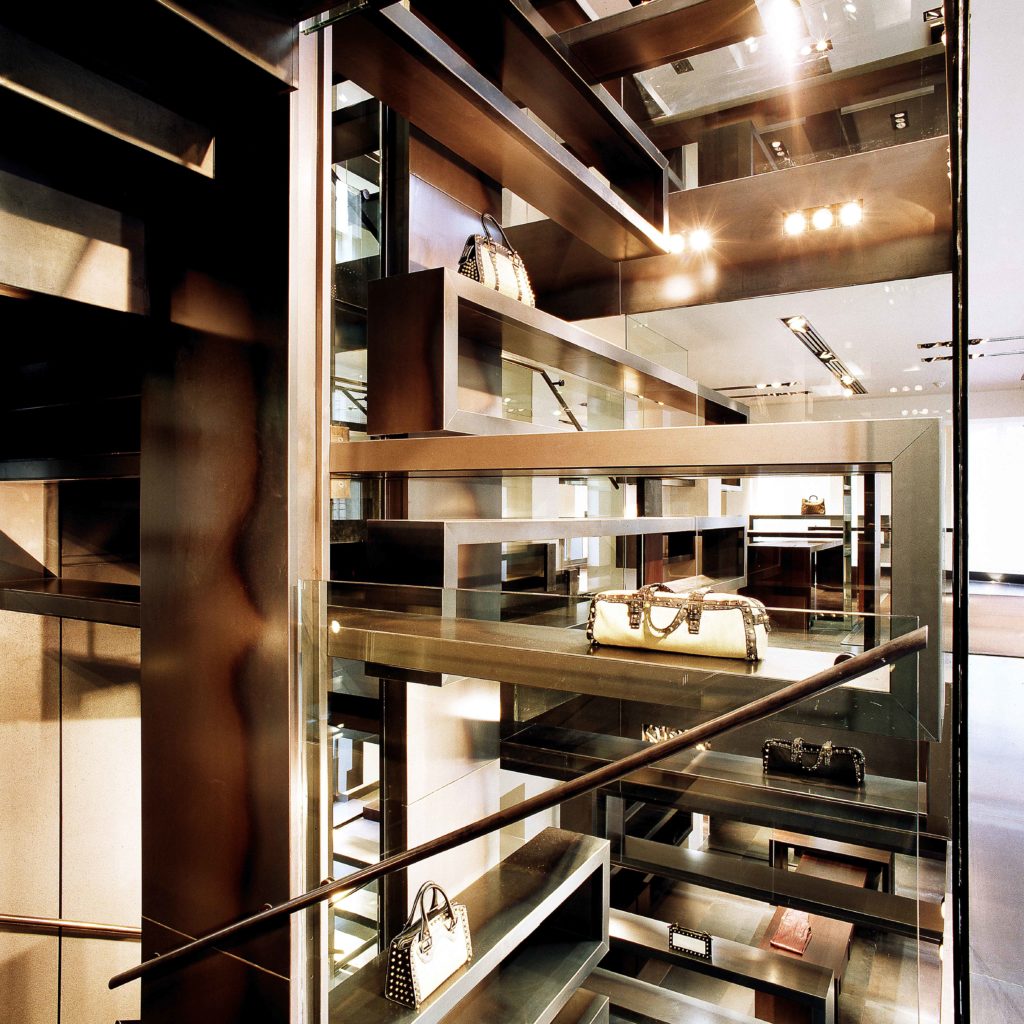 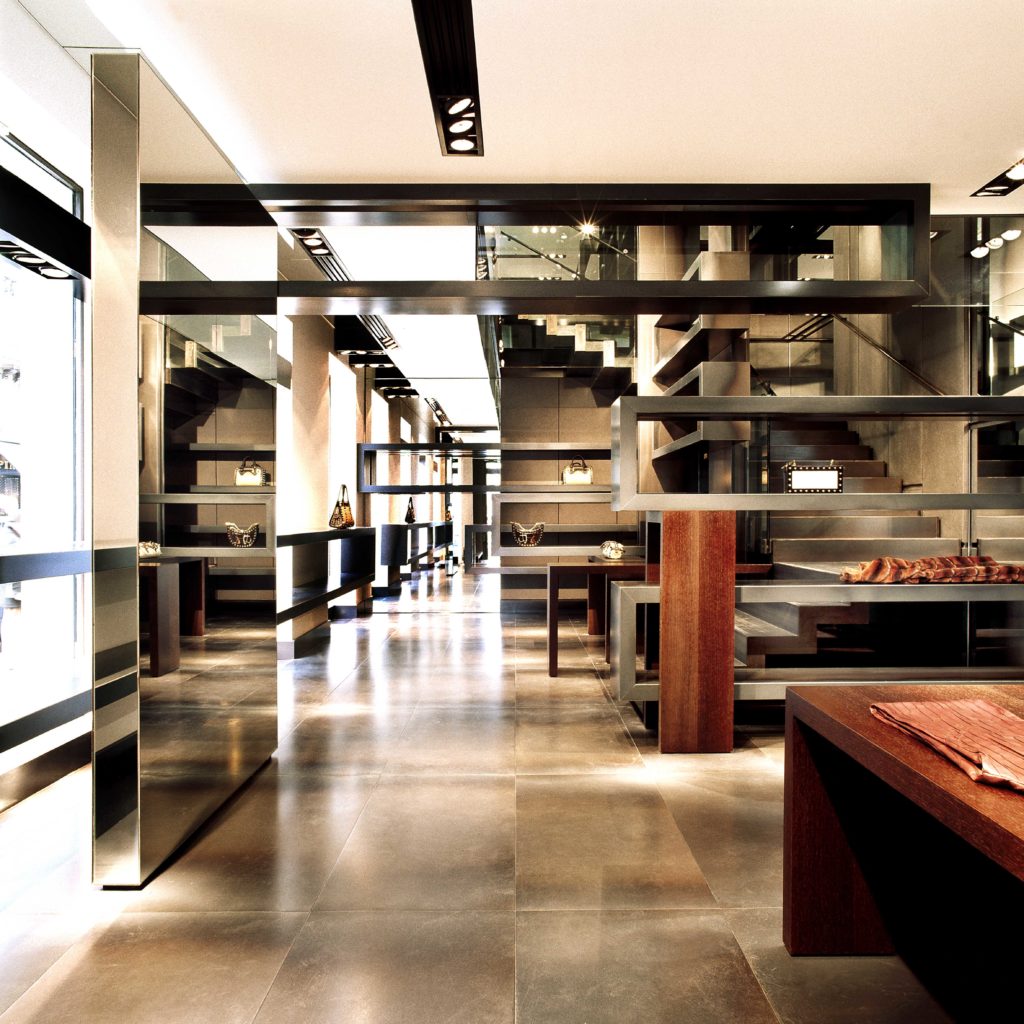 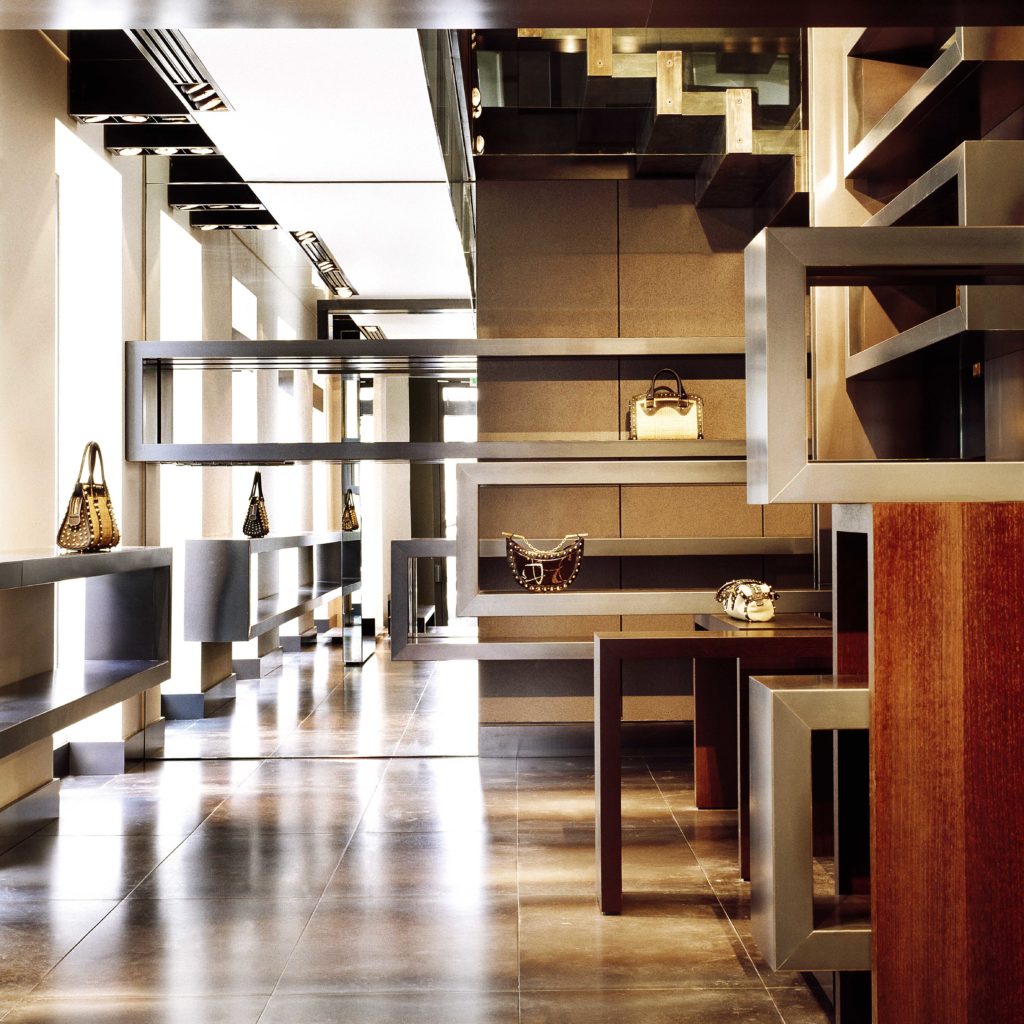 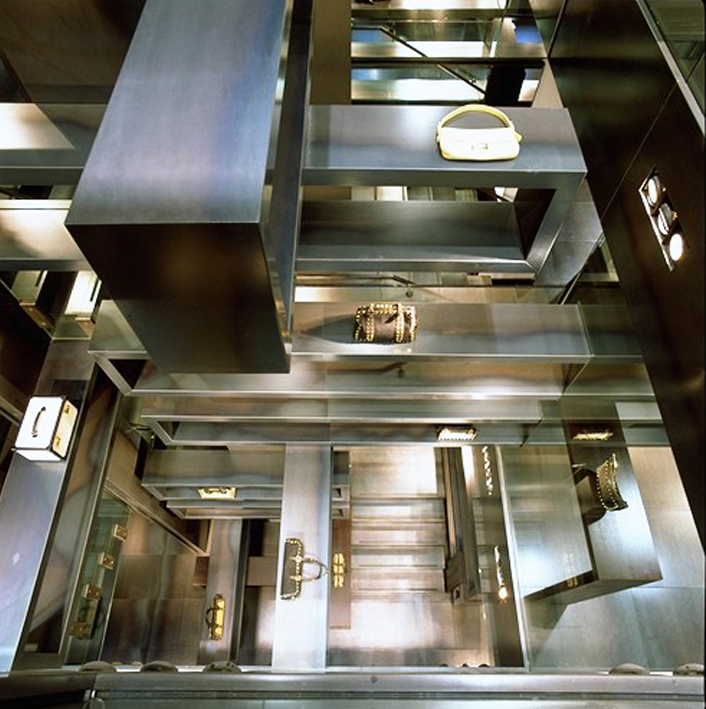 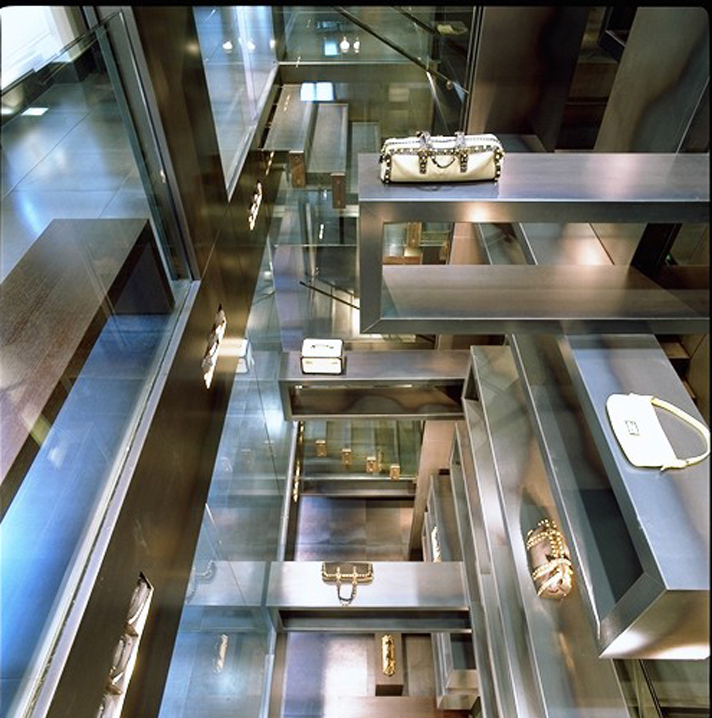 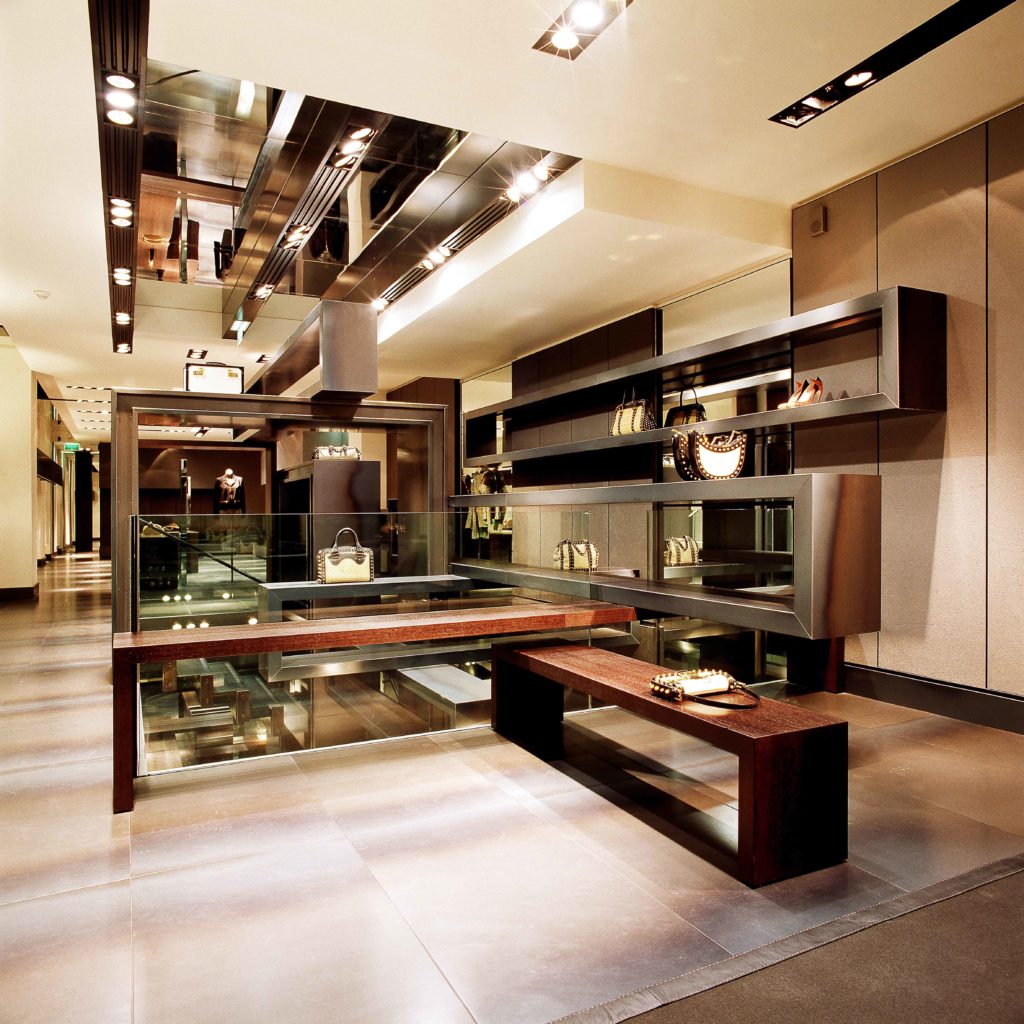 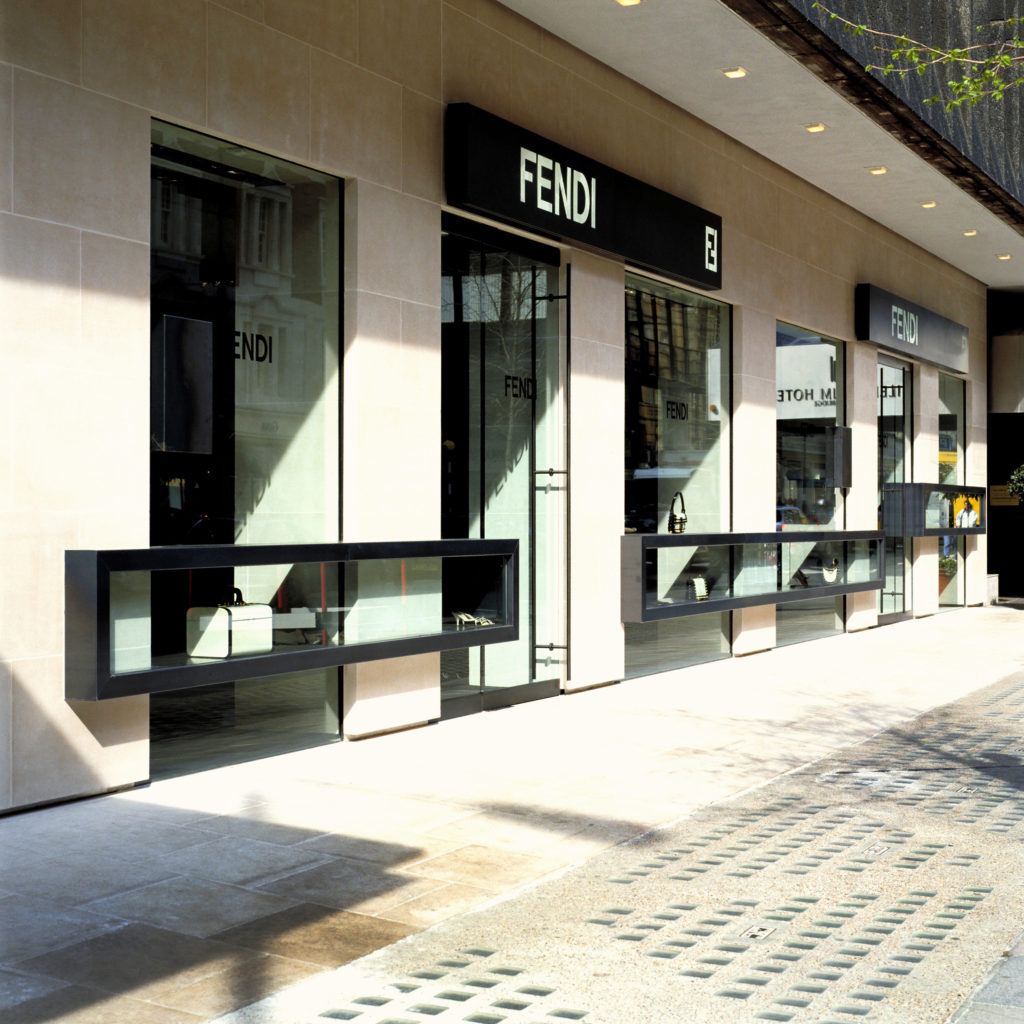 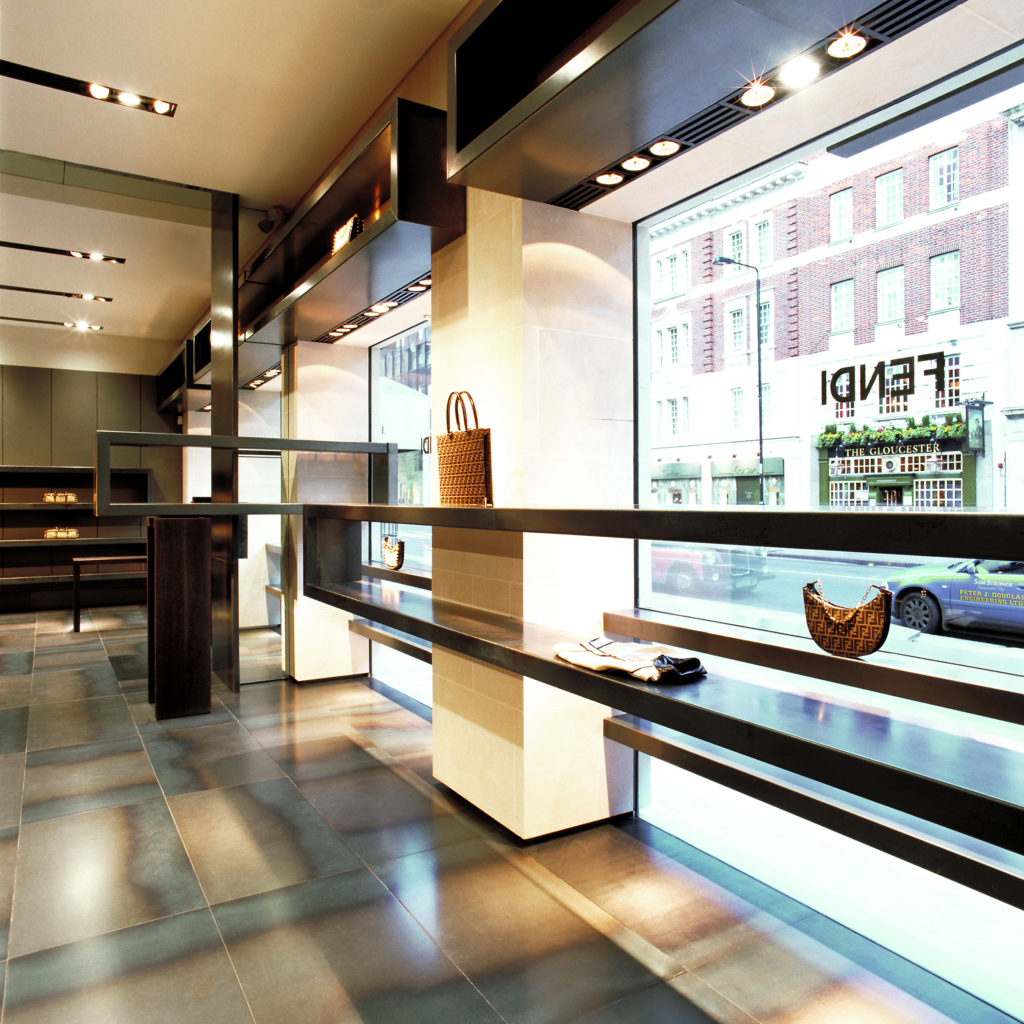 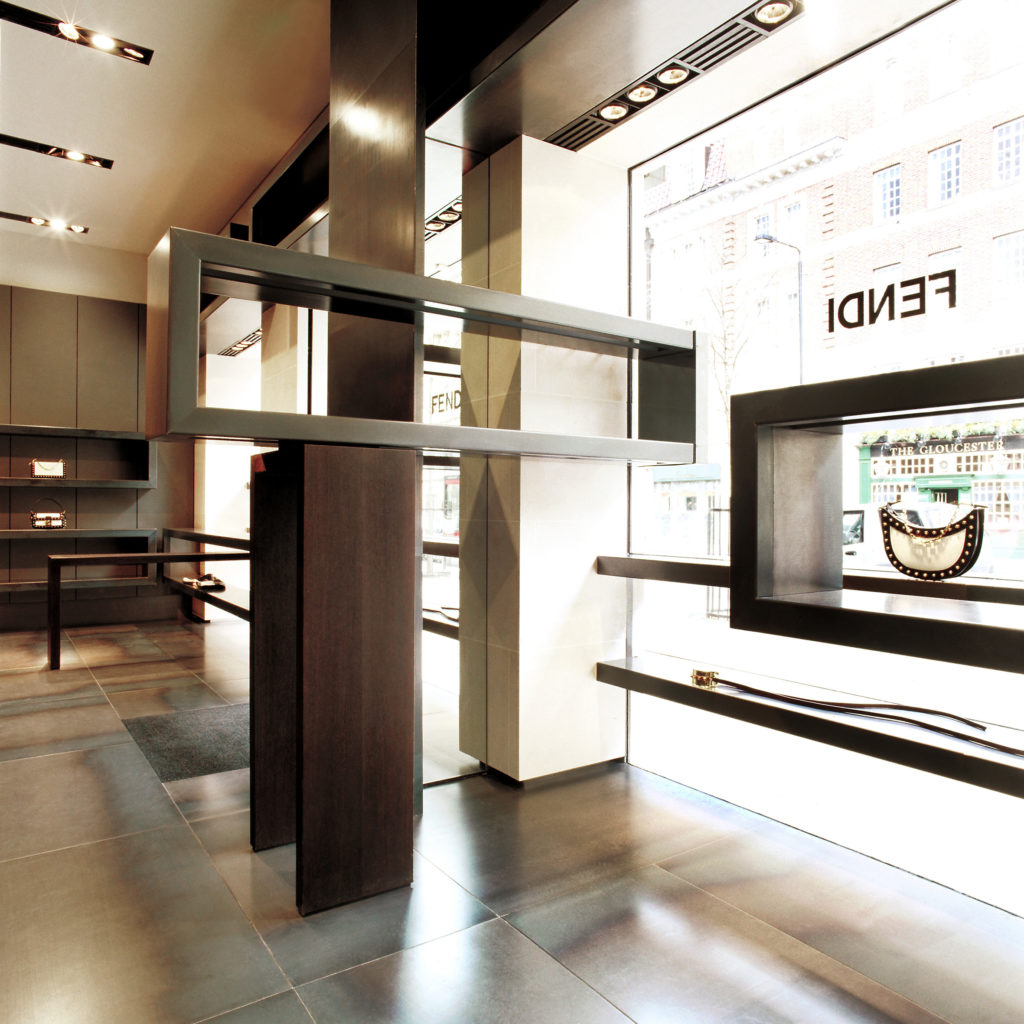 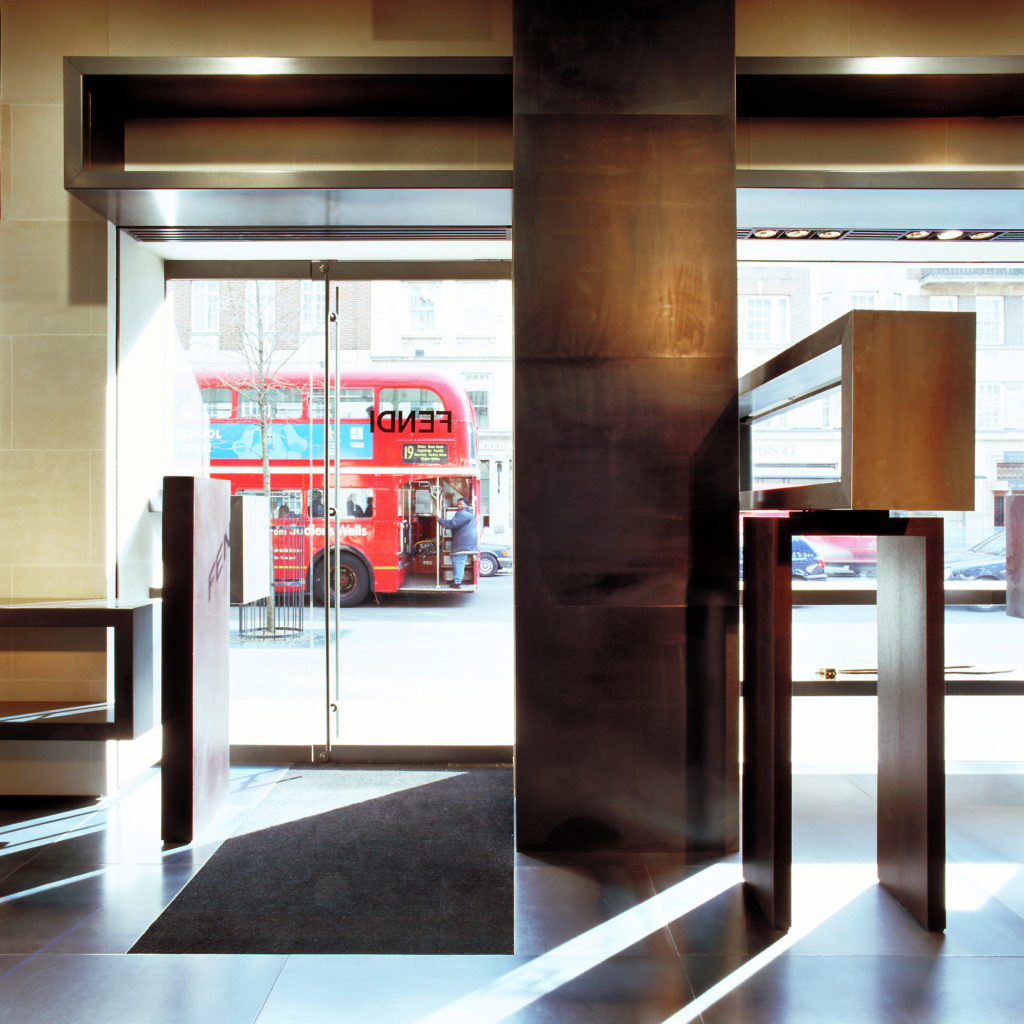 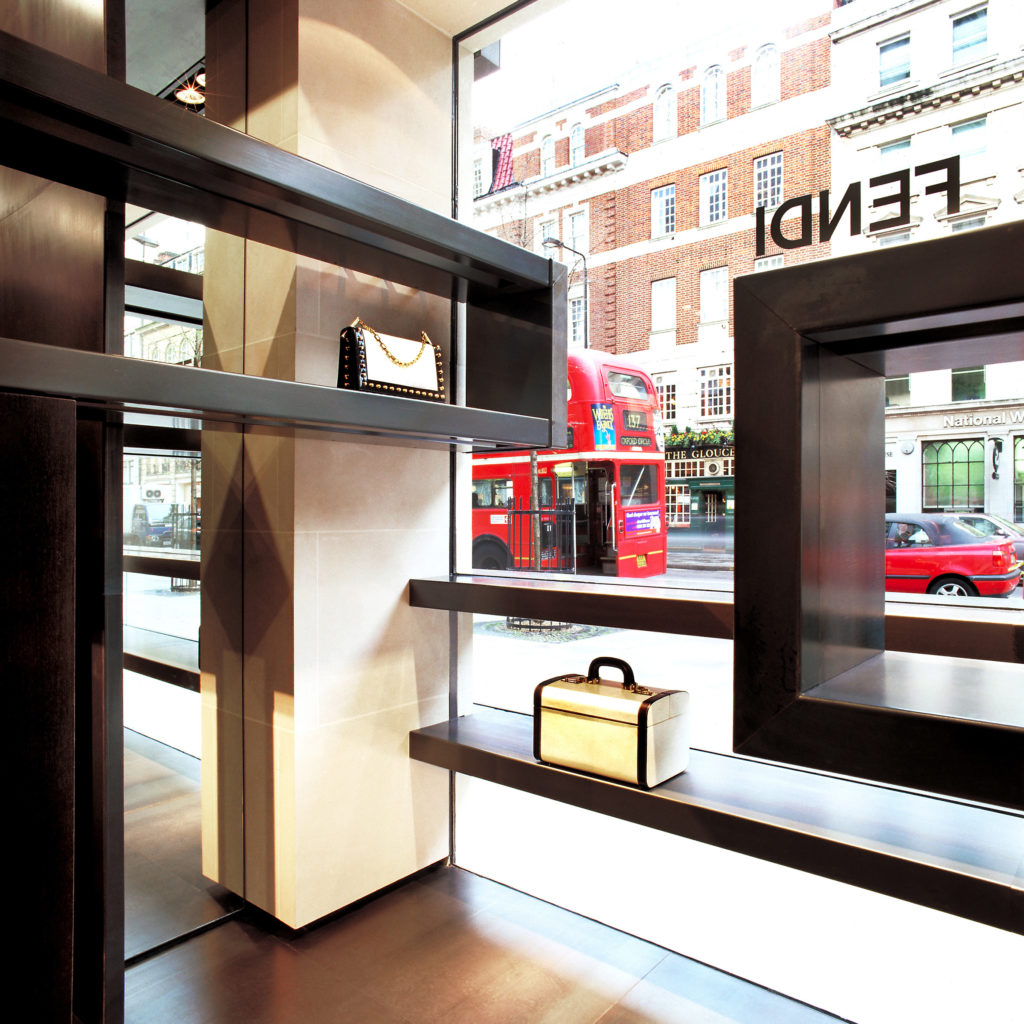 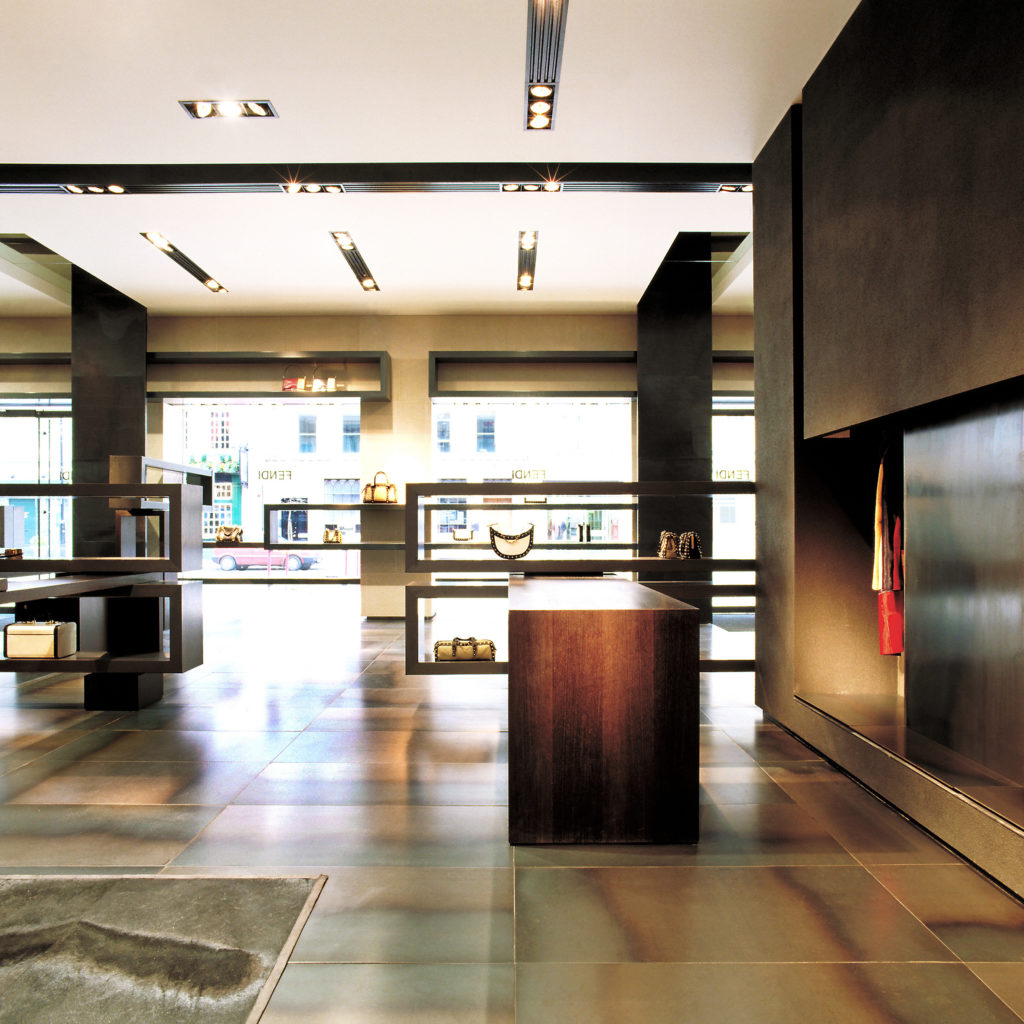 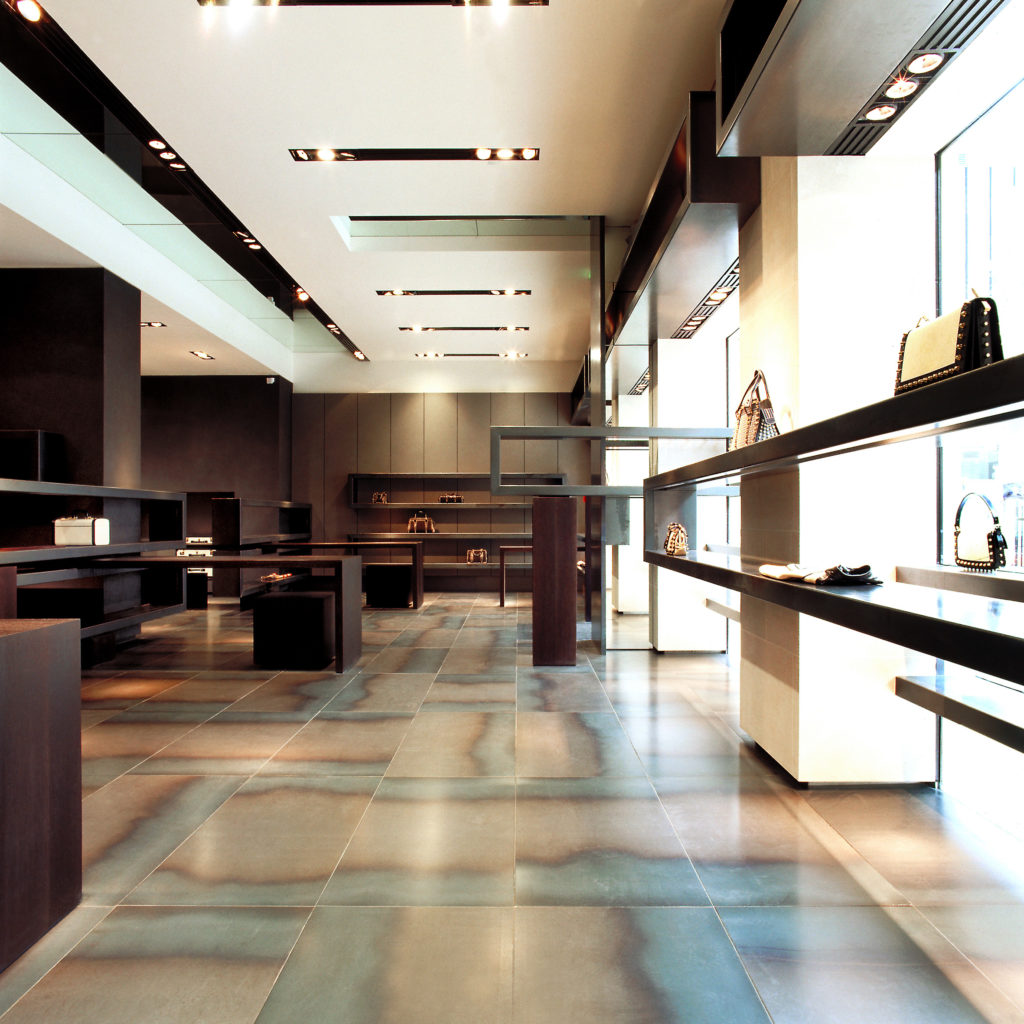 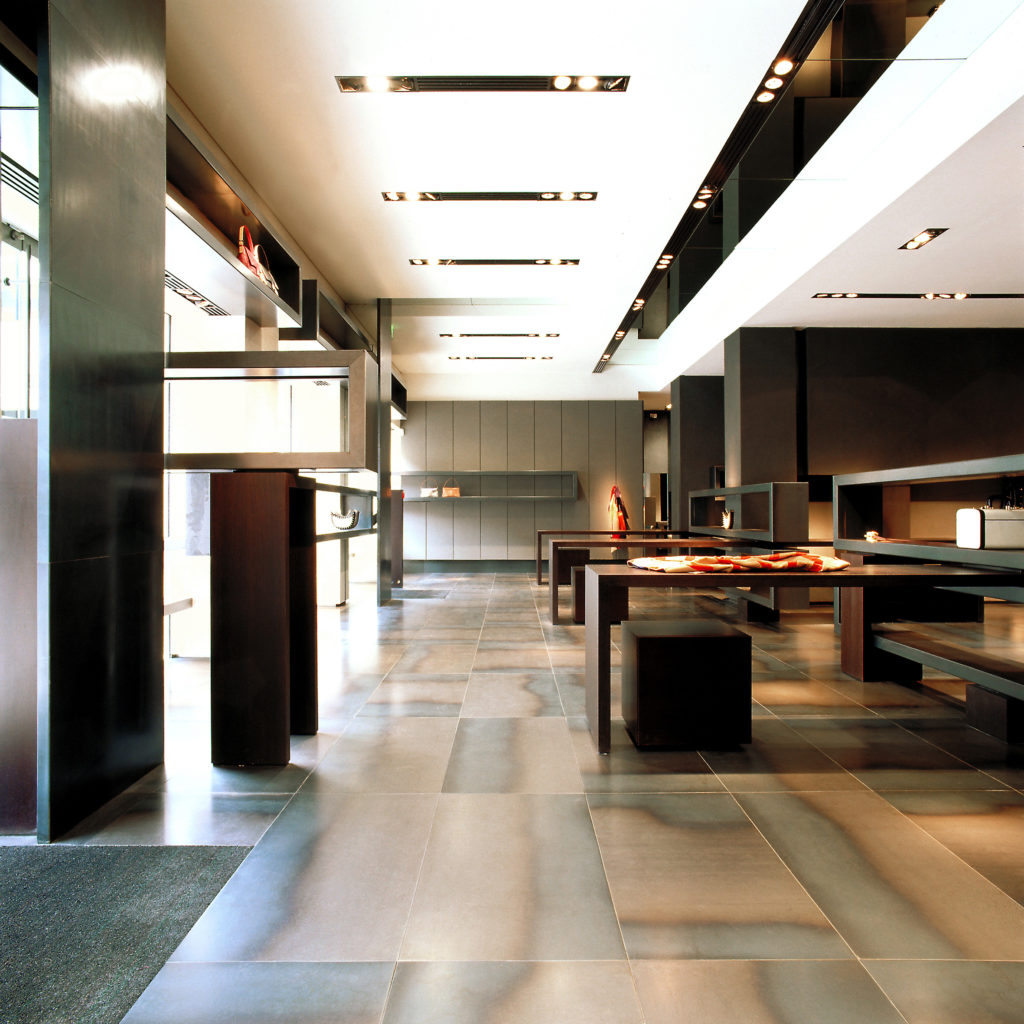 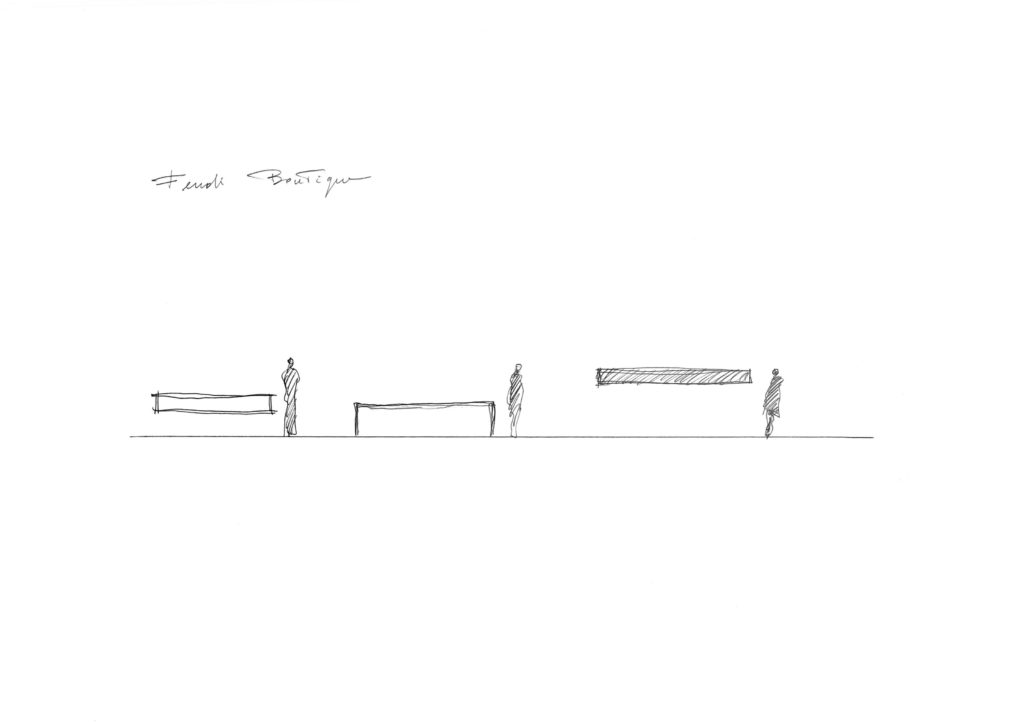