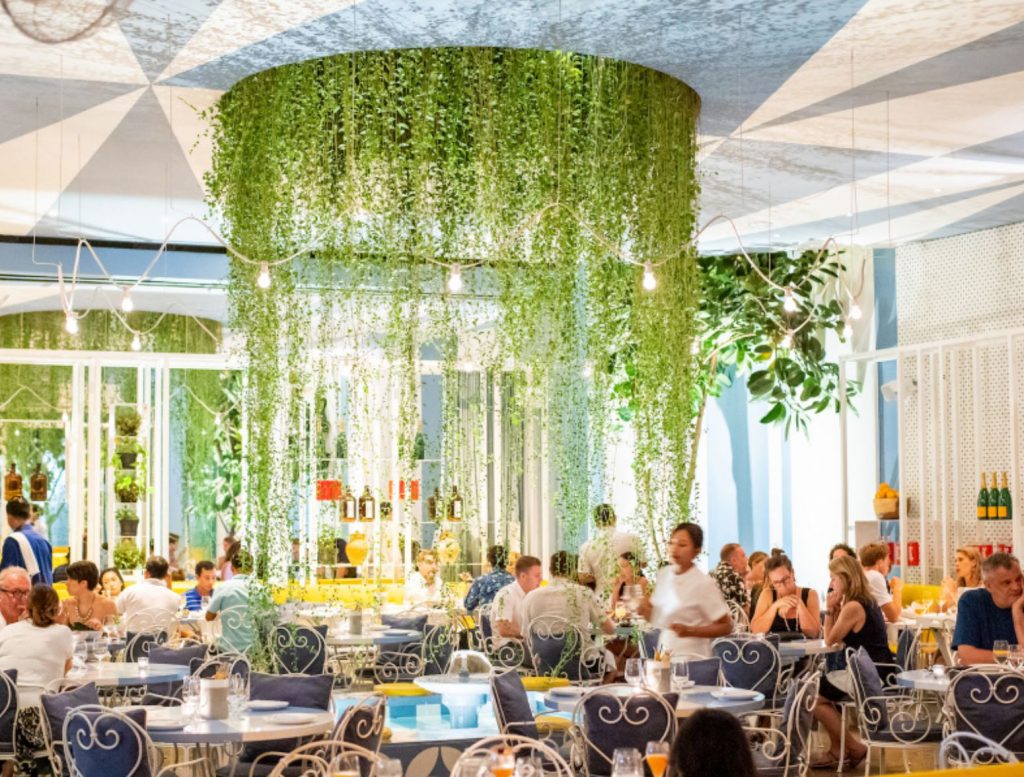 “Da Maria is our portrait of Maurice Terzini in Bali. “Bali Style” wouldn’t have worked for the ideas Maurice had for this restaurant. He wanted to serve very simple, fresh uncomplicated Italian food in a tropical setting.

In Da Maria we wanted to create a cool, fresh space with air conditioning that also felt like a garden. Maurice is about a contemporary reinterpretation of classical Italian hospitality. We needed to give him a restaurant that represented that idea.

The central concept was  to create an Italian courtyard garden restaurant inspired by those from the 1960’s on Capri and the Amalfi Coast. They normally had simple fountains. Rubber trees were also popular at that time with their lush, dark green leaves. Bali is also full of fountains and also rubber trees so there is also a local connection but with an Italian twist.

Giò Ponti created an iconic hotel in Sorrento called il Parco dei Principi in 1960, the first “Design Hotel”. He designed everything including the magnificent graphic tiles. It is an iconic riviera hotel.

Since the most visible element of the restaurant is the ceiling we decided to take some Ponti motifs and enlarge them and manipulate them to create the very graphic ceiling that ties in the skylights, the divisions between the rooms and the long, slanted wall along the side. We then continued the super graphic idea to the other surfaces: where the diagonal Pontiesque lines meet the walls they become stripes. We then introduced a second graphic that resembles tiles on the bars and fountains. It has all been painstakingly hand painted by a group of incredible artists.

We have taken these simple elements and we have created Da Maria. Inspired by past images it looks very third millennium and resembles no other restaurant in the world.

The fountain is an Italian and  Neapolitan icon. Also wanting to create a cool, refreshing restaurant, the noise of water already makes one feel refreshed. There is a very simple fountain in the Santa Chiara cloister in Naples. It is an image that came to mind when we were designing. It is about experiences and sensations and not about copying the actual thing that inspired you.

The chandeliers use simple festoon lighting that would have been used in 60’s Italian courtyard restaurants (and still are). Bali is also full of these lights so we wanted to create something different. We decided to create a circular chandelier. The effect is very beautiful but made out of a very poor and cheap element. It also reminds us of the beautiful circular chandeliers we created at Icebergs Dining Room and Bar on Bondi sixteen years ago. They are part of our and Maurice’s DNA.

Everything was made in Bali. The chairs and tables are our version of the French fer forgé style. It was very exciting to work with such talented people, always with a smile. Modifications were made to prototypes and readily delivered.

The porte-cochère gives a covered entrance with boutique on left and reception on the right. On axis there is the first bar, then the restaurant with its porchetta grill, two pizza ovens and open kitchen and finally the garden bar with the watermelon display and cutting area. At the end there is the outside courtyard for al fresco dining even though the restaurant already feels like a courtyard… .At Icebergs Dining Room and Bar on Bondi Beach in Sydney we had three iconic egg shaped cane chairs in the bar where everyone had their photo taken (before selfies!). We wanted to reinterpret this and so we put some fer forgé hanging chairs in the garden and also outside for when you are waiting for a taxi or the driver to arrive. We love them, such a simple thing really animates the entrance.

Da Maria in Bali is very today but timeless. As in all of our projects it has a  classical  quality to it that won’t date. It already feels like it has always been there, that it was the only logical thing to do on that site. A timeless classic, as the other restaurants we have designed for Maurice, without doubt one of the world’s greatest restaurateurs and a continuous inspiration to us”. 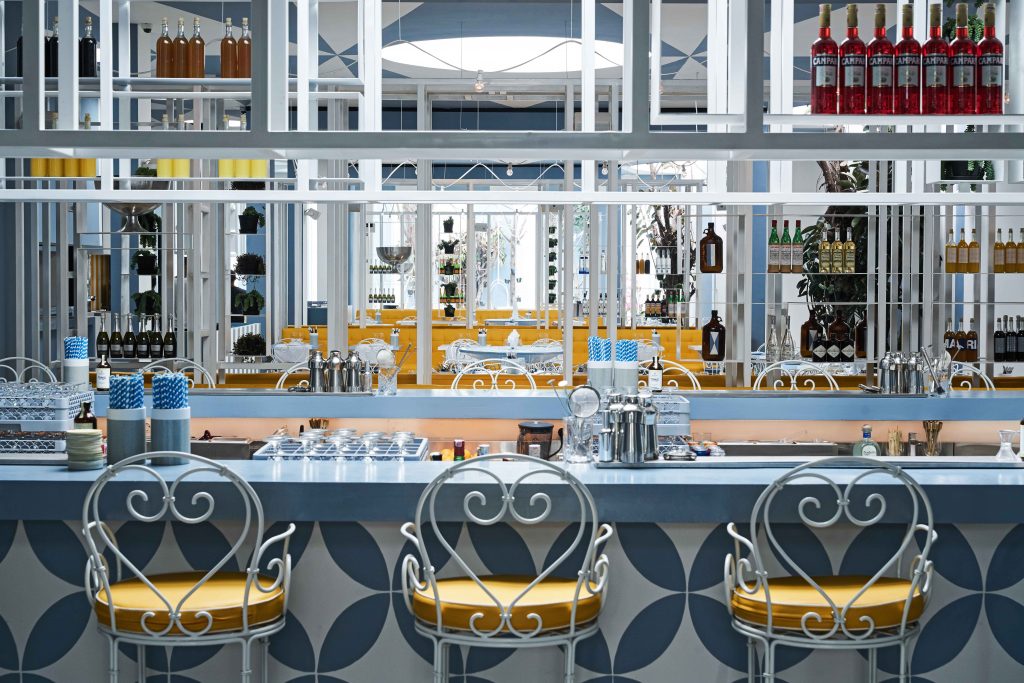 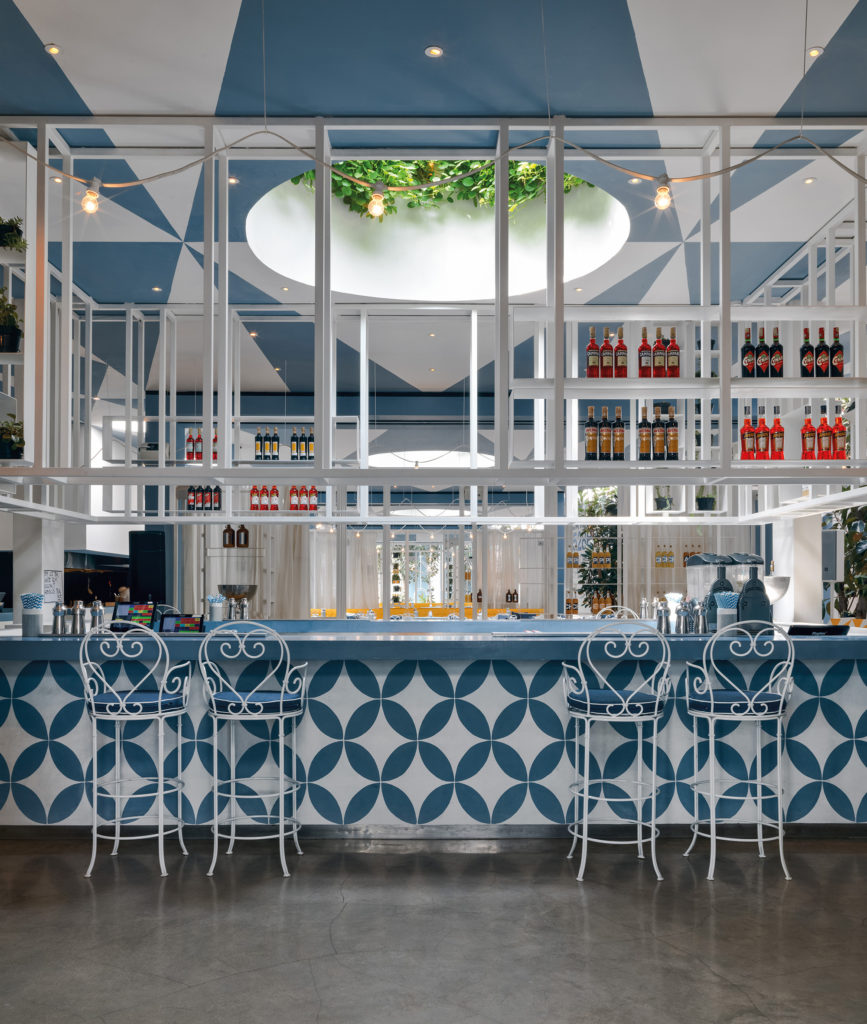 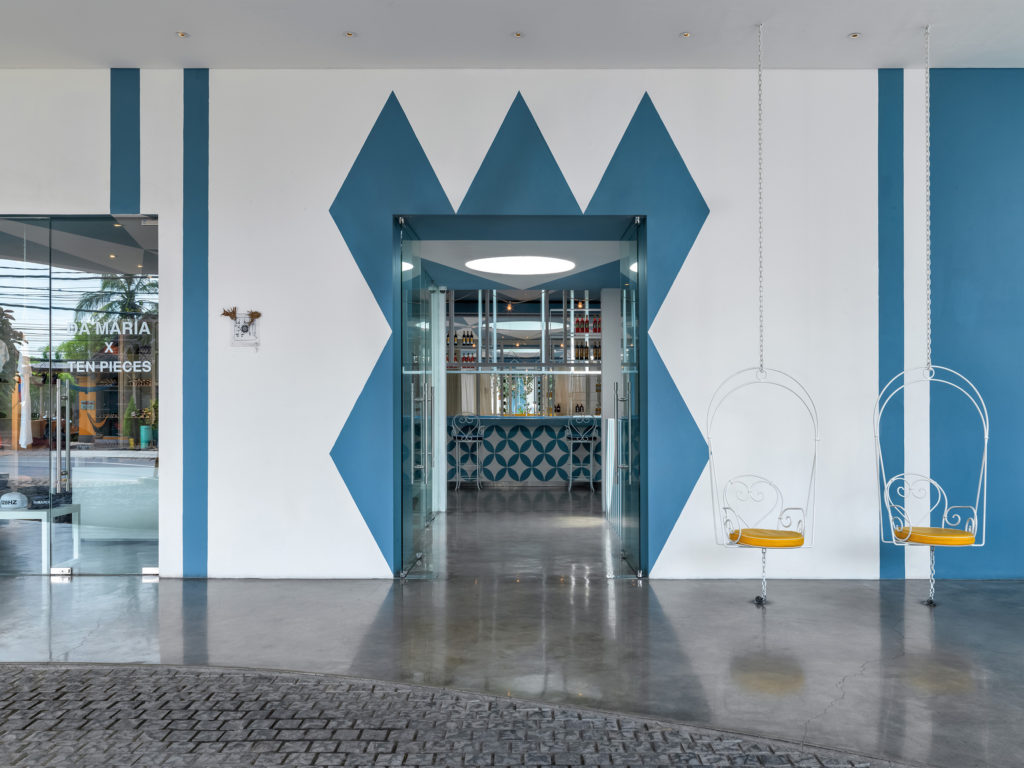 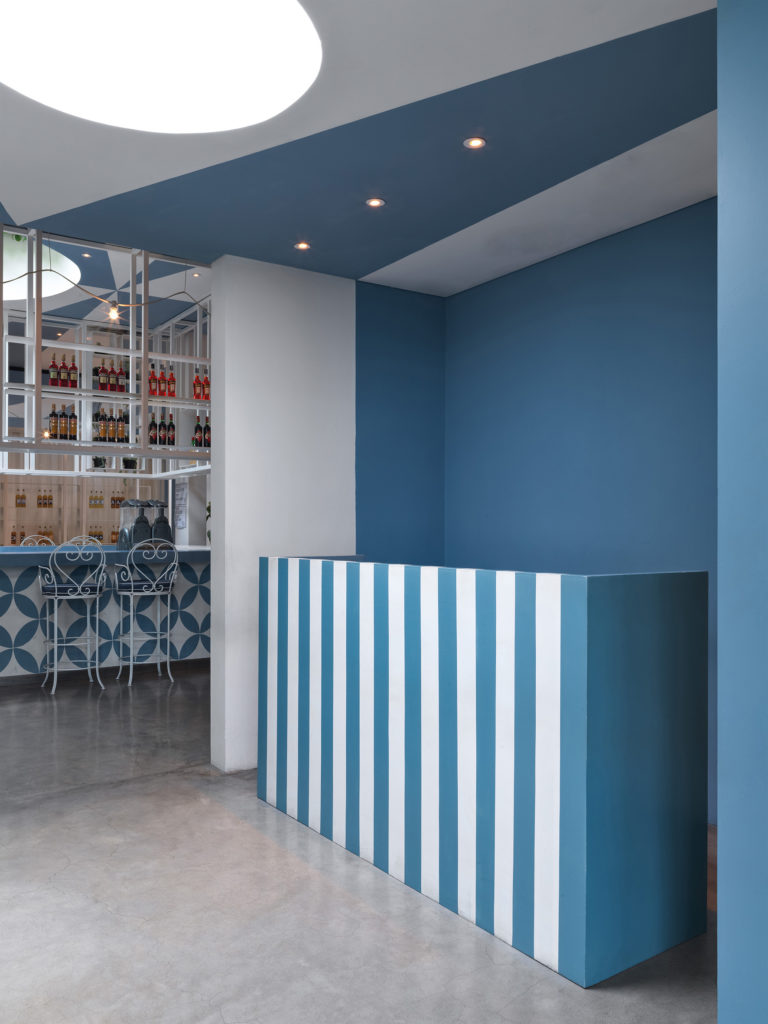 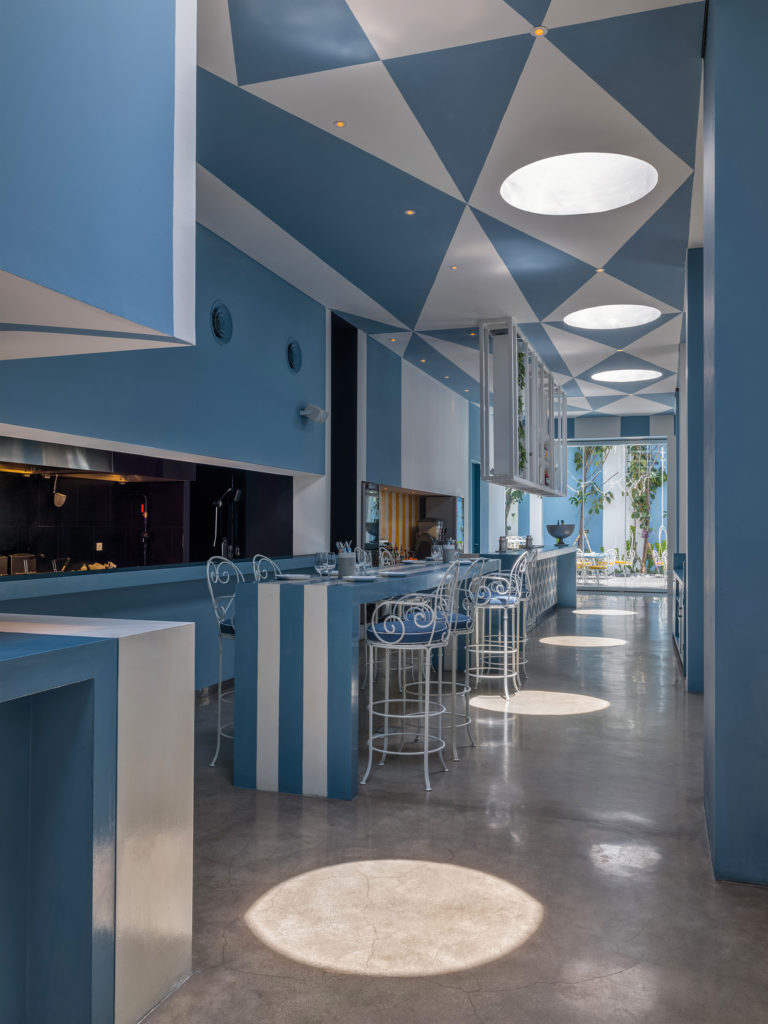 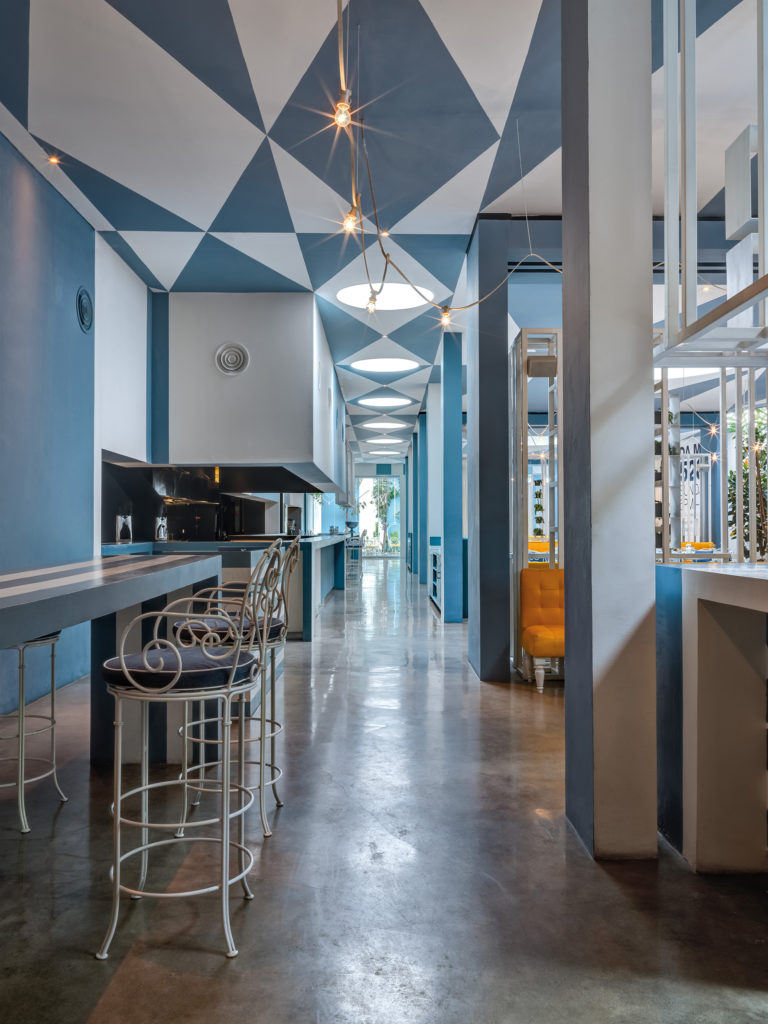 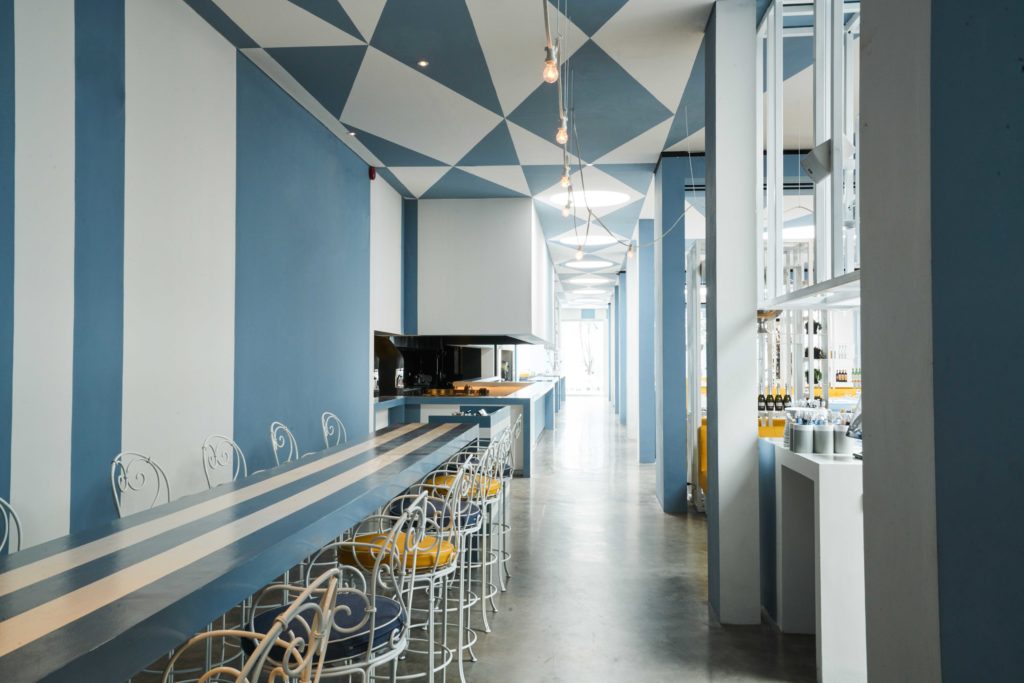 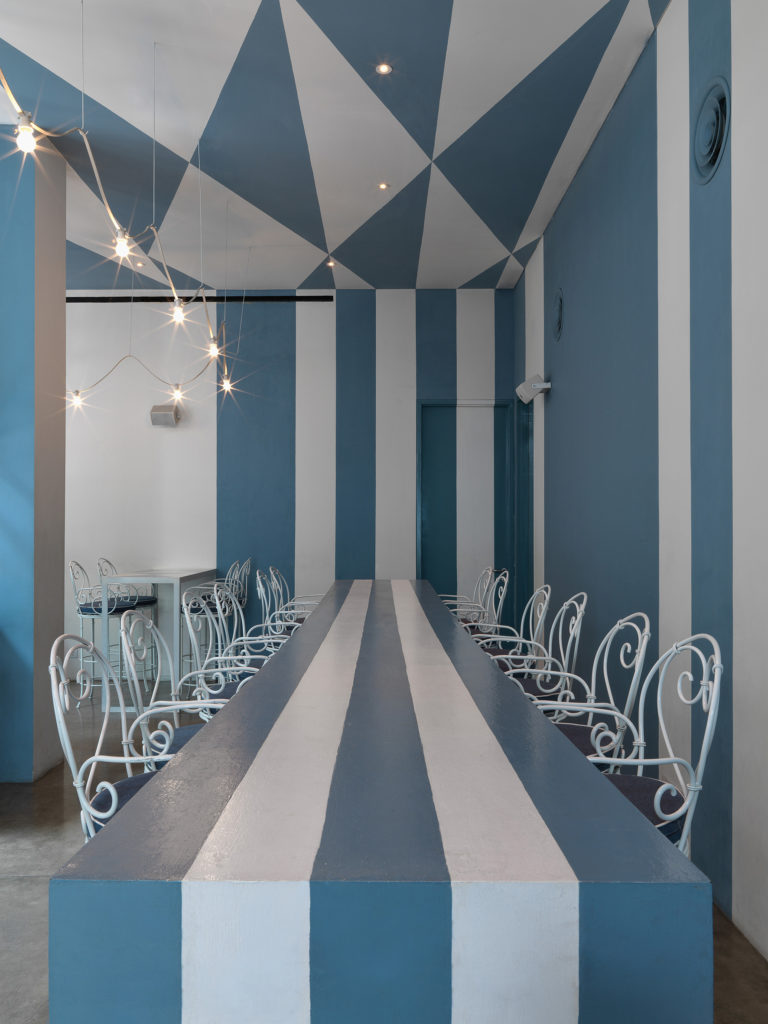 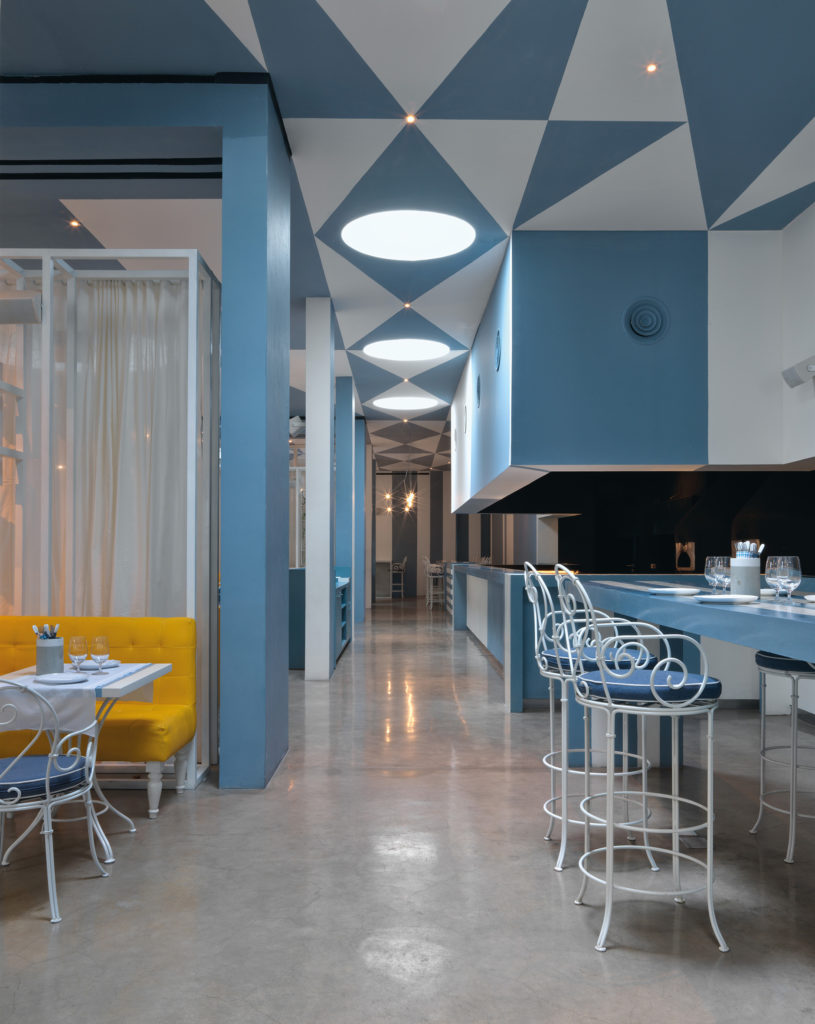 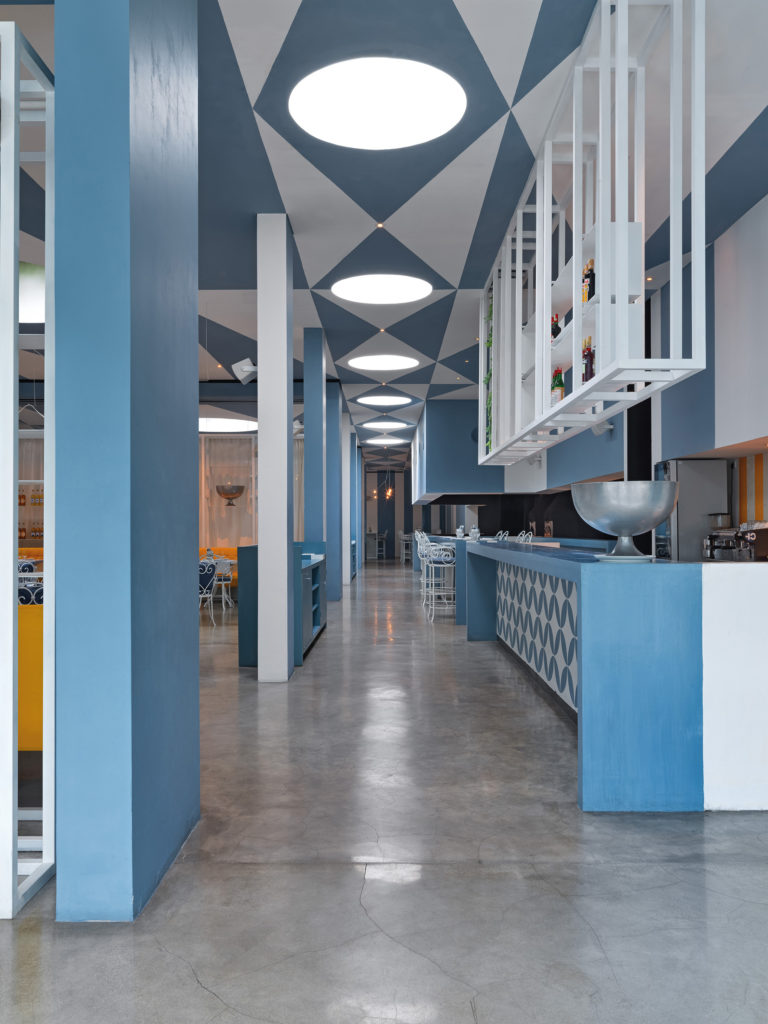 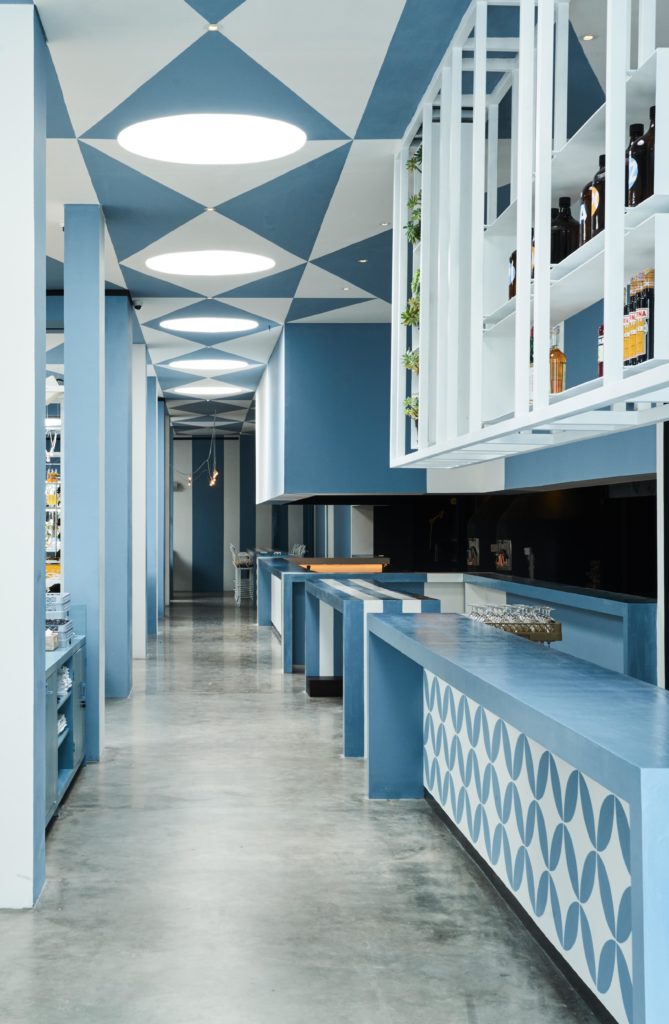 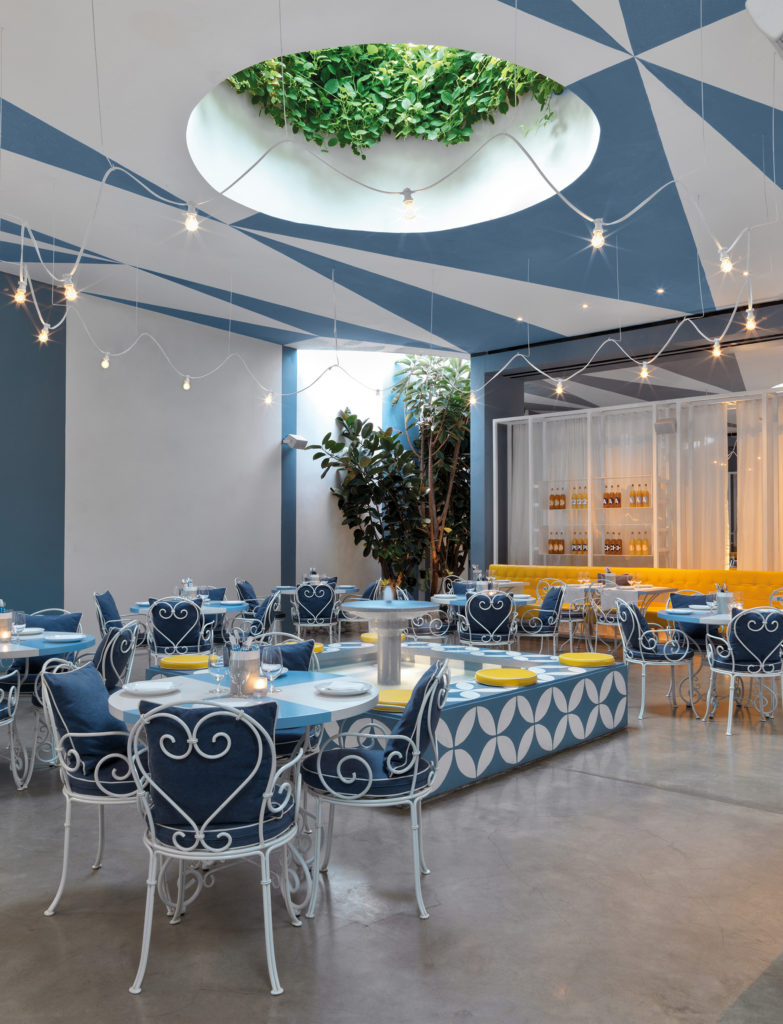 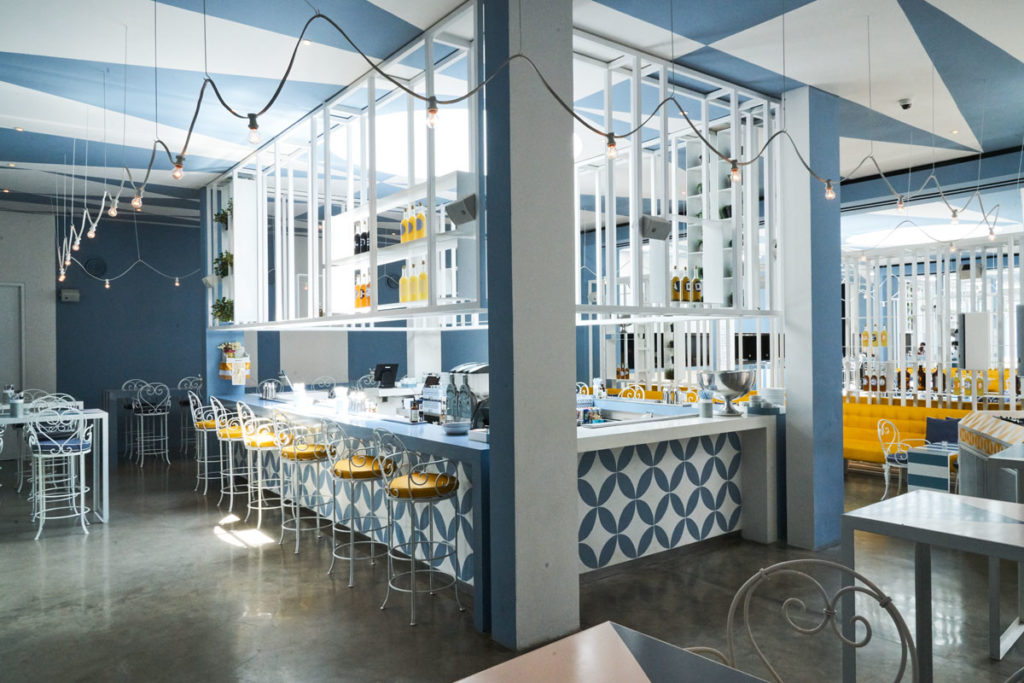 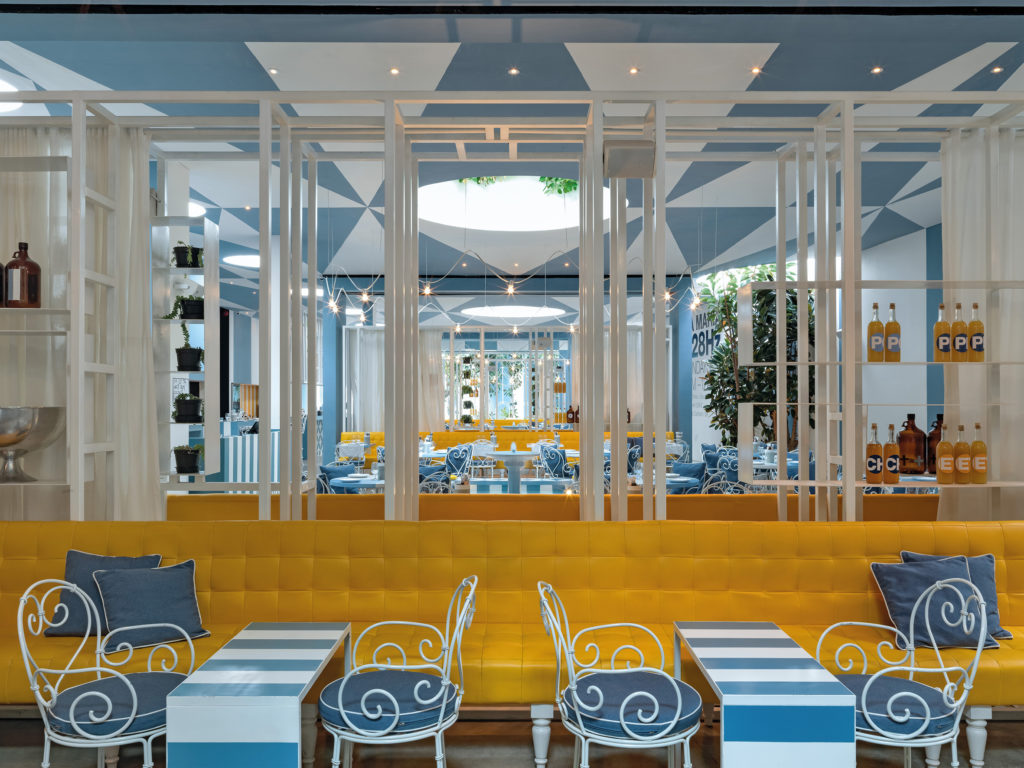 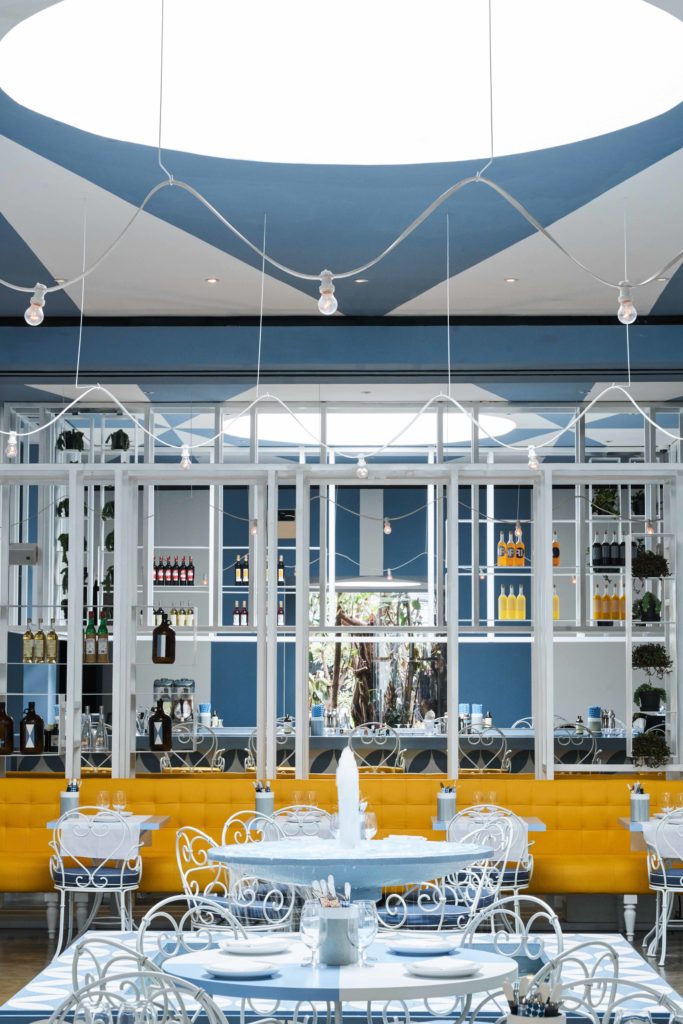 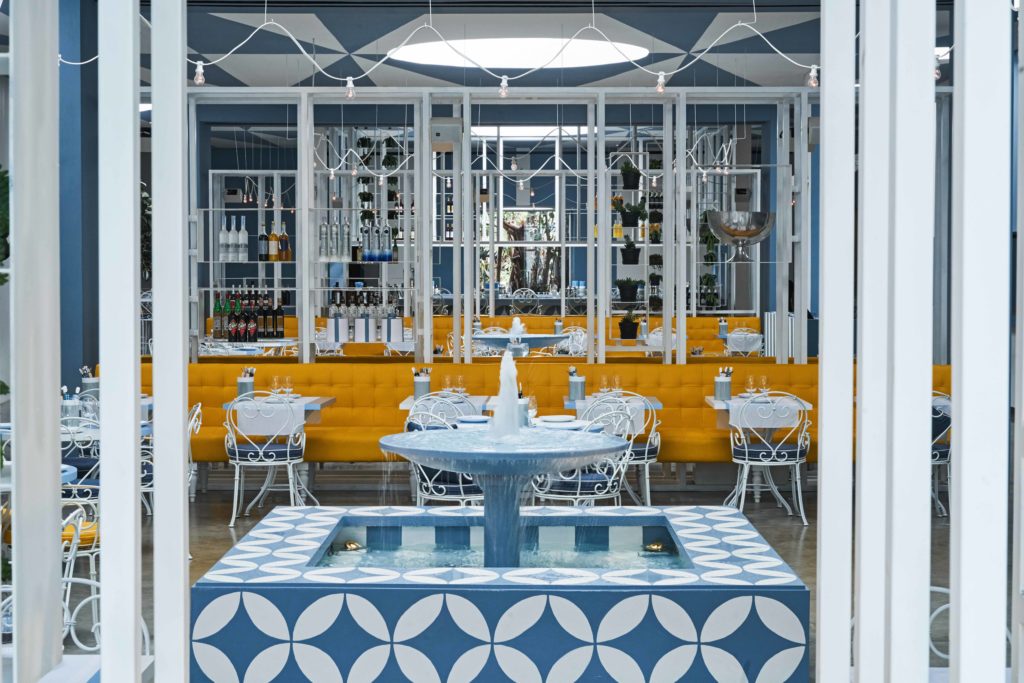 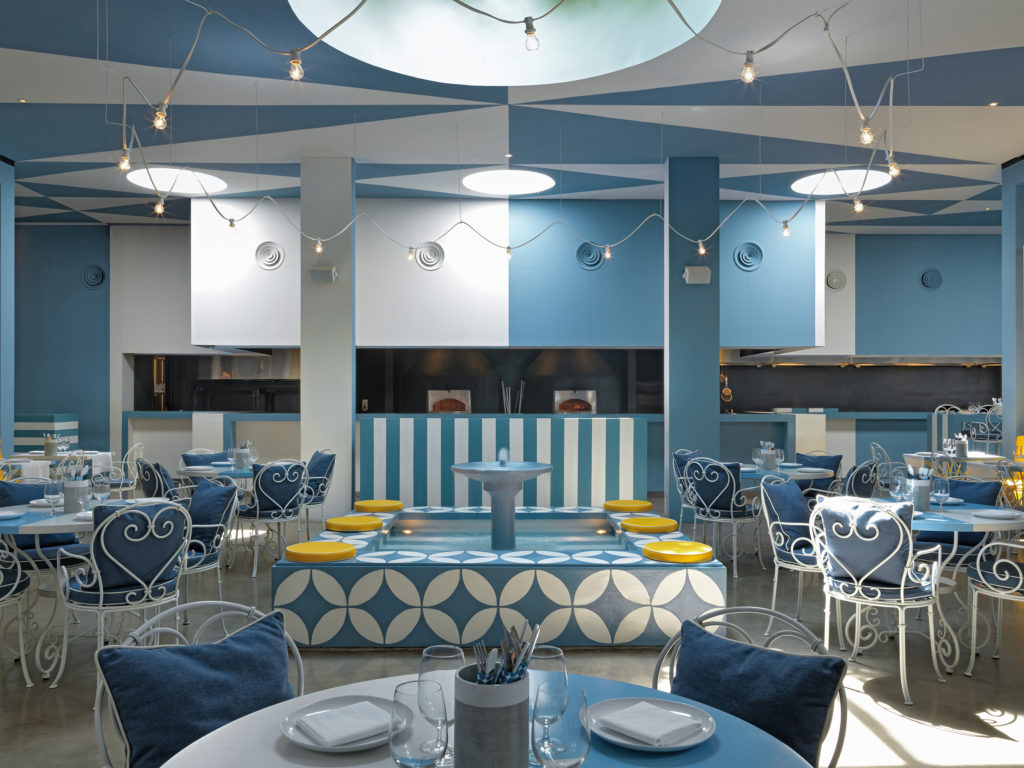 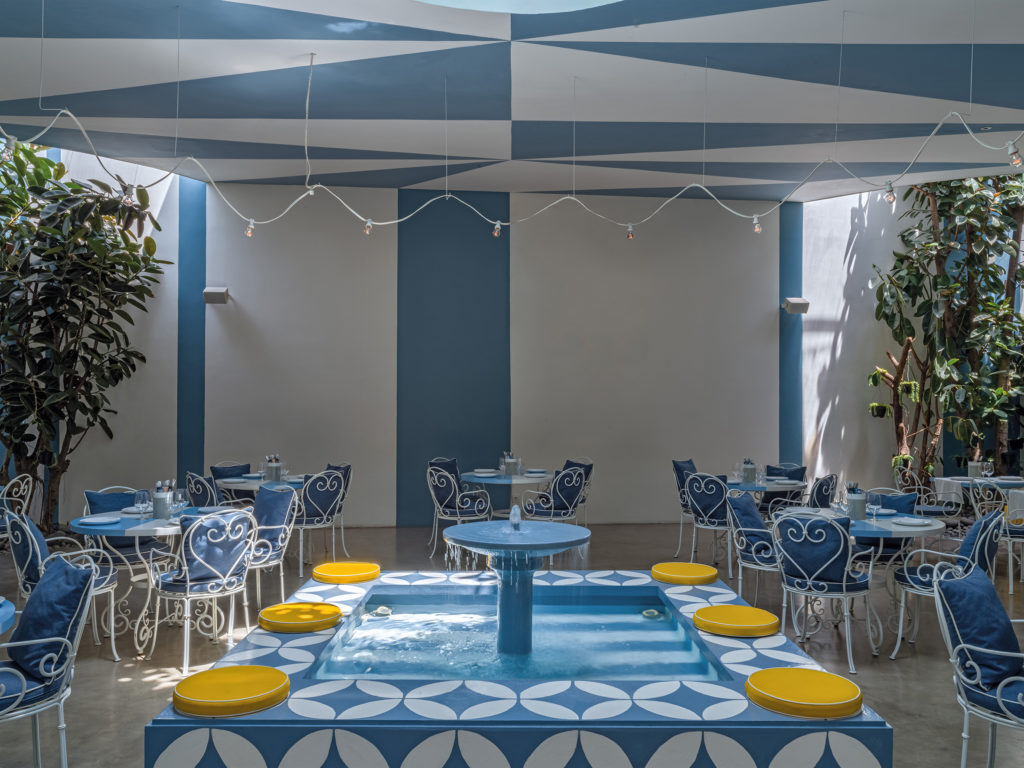 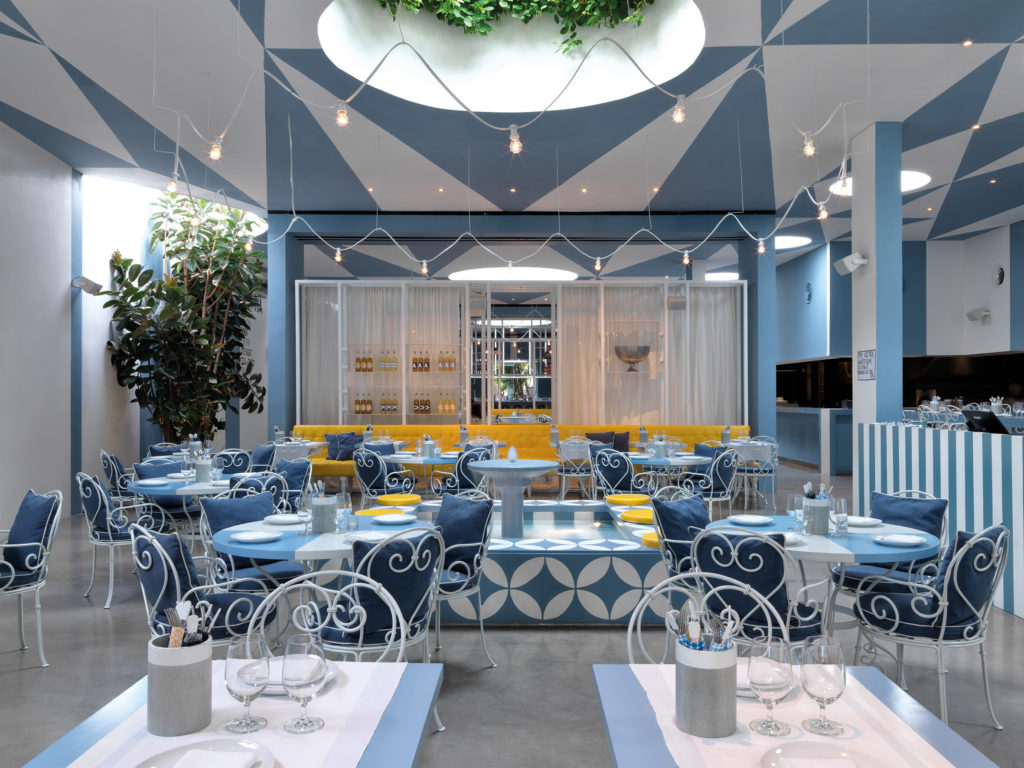 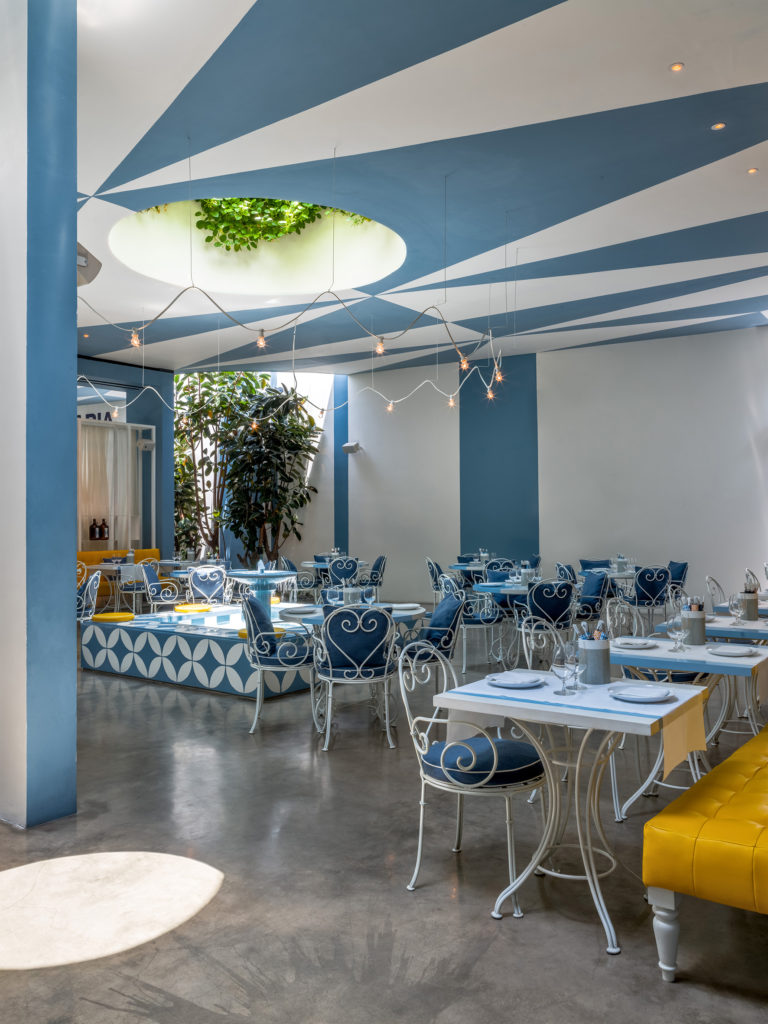 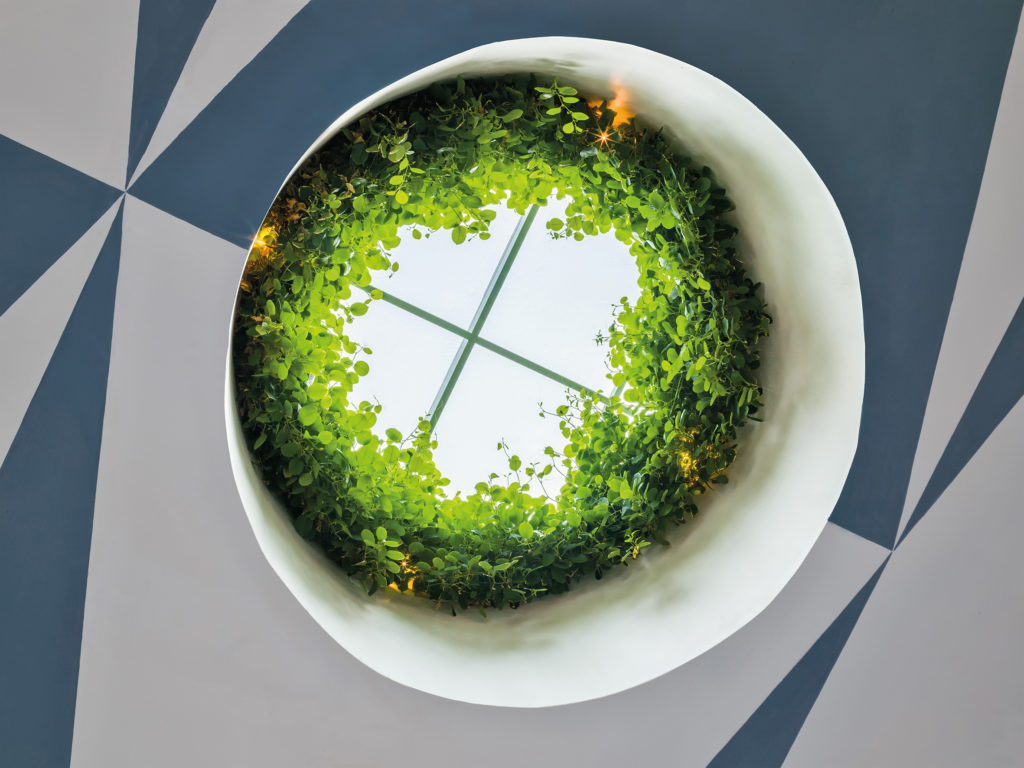 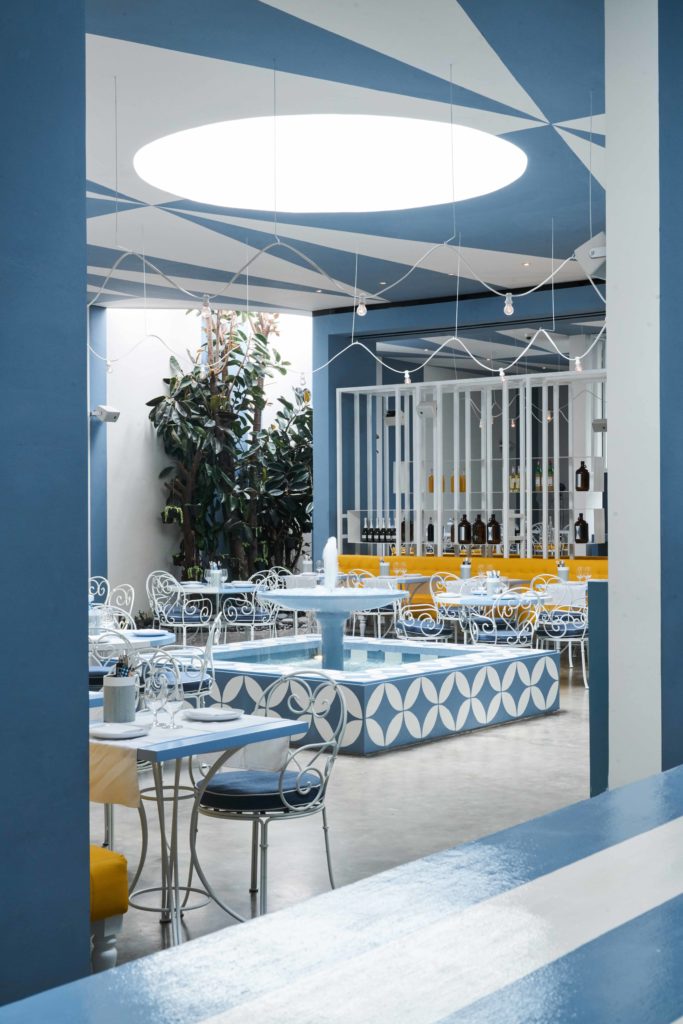 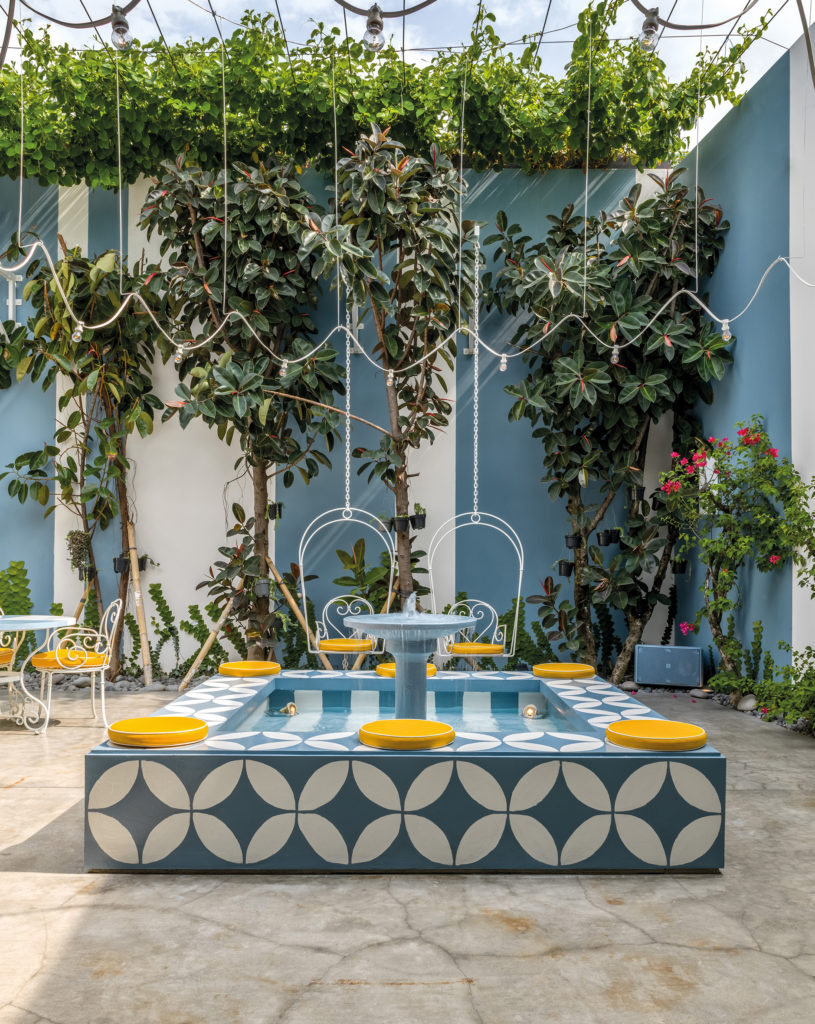 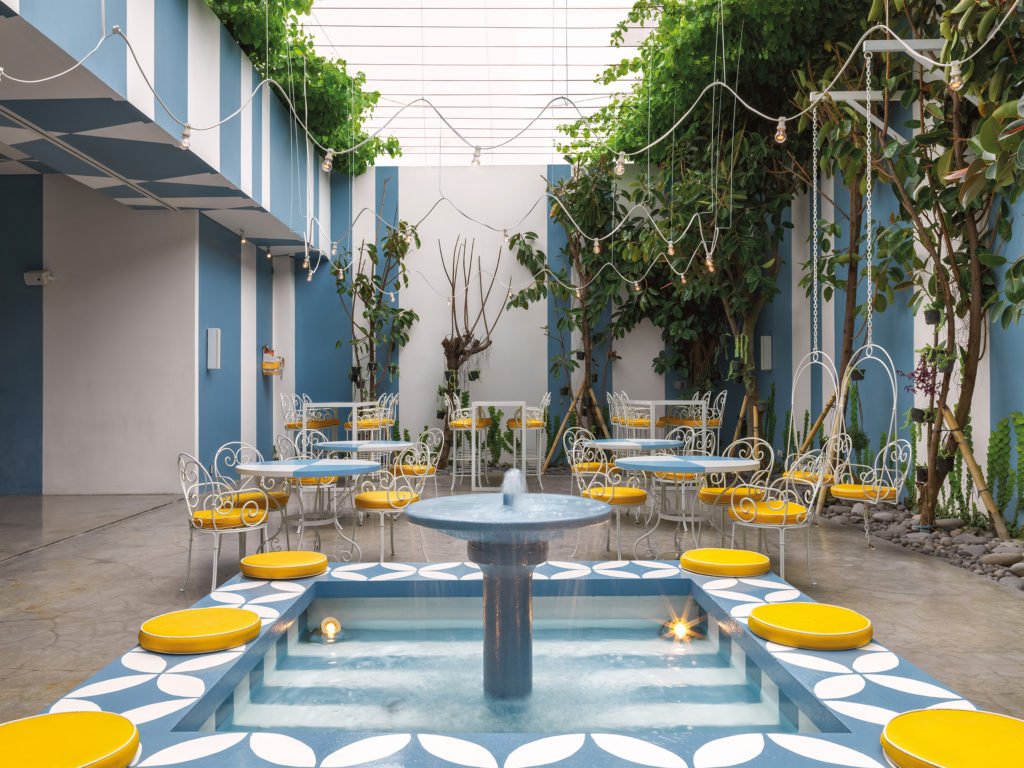